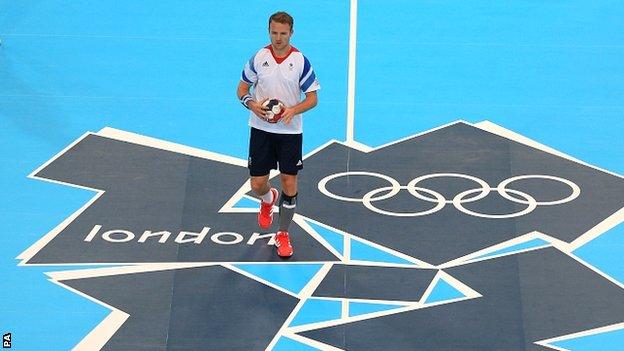 Covering the London Games as a journalist, you become immune to tales of athletes collecting dustbins and carrying bricks in order to keep their Olympic dream alive.

After all, nobody made them do it and no-one ever gave my handyman a medal for plastering the wall of my bathroom.

Rank outsiders Iceland caused a sensation at the 2008 Beijing Olympics by reaching the men's final. Although they eventually lost to France, it was Iceland's best showing in any Olympic event since Vilhjalmur Einarsson's triple jump silver in 1956. Iceland's president called their semi-final win over Spain "the biggest moment in Icelandic sports history".

But talk to Ciaran Williams, playmaker for Great Britain's handball team, and you are reminded that his participation in London is not necessarily an end in itself.

Rather, it is a suggestion to those watching that they, too, might be eloquent in sport - it doesn't matter which one, just any sport - which can be so fulfilling to participate in and provides so much pleasure to millions.

"I've worked six long years for this, doing a whole host of things, from cleaning the toilets at a school to painting and decorating, not the most glamorous of jobs," Williams, 24, and from Manchester, told BBC Sport.

"But it was well worth it. I'd do it all again tomorrow if it meant playing in front of these crowds every four years. They can see the passion we play with and that bulldog spirit that people talk about. That's what it's all about.

"When you walk into the changing rooms, there is a sign that says 'Inspire a Generation'. If I can inspire a playmaker of the future, I'll be so proud."

Handball is being described as a "sleeper sport" at this year's Olympics, which it is to most British punters crammed into the Copper Box in Stratford. But elsewhere in the world - all corners of Europe, North Africa, Asia, Latin America - the sport has been out from beneath the covers for years.

I've had so many random people say 'wow, I can't believe I've never heard of this before, it's my new favourite sport

If Homer is to be believed, the ancient Greeks played a version of the game, as did medieval knights in England. Henry VIII banned it because it was getting in the way of archery practice and the rest of the world nicked it, improved it, and now we don't win medals in either archery or handball.

Down at the Copper Box on Tuesday, Williams' team went down 41-19 to Sweden. If it sounds crushing, that's because it was - on the surface, at least. But dig a little deeper and you realise the result, as far as Great Britain was concerned, was something bordering on a miracle.

"Half of our team came through a talent ID programme five years ago," says Williams, who moved to Denmark in 2006 along with 30 other Brits, seconded to a top club academy.

"Before that, they hadn't even heard of handball. Five years ago, these guys we are playing against had won world championships.

"Look at our captain, Dan McMillan - he's from American football. If you're willing to commit and work hard, handball is a sport you can thrive in. Whether you come from rugby, football, basketball, there's a role for you in handball."

It is easy to understand why handball is such a big hit elsewhere. Rugged, free-flowing and full of goals, there is a joyful simplicity to it, almost as if they are improvising the whole spectacle as they go along.

Prime Minister David Cameron held a Cabinet meeting at the handball arena, known as the Copper Box, in January to mark 200 days to go until the Olympic opening ceremony

As for the poor old goalie, it is difficult to think of a more thankless role in sport - a fox? But only if you consider hunting a sport - to the extent that I started out thinking we could have saved on lottery money and stuck a scarecrow between the sticks instead.

Yet, despite having large men propelling a ball at them from barely five yards away, saves are made - by arms, by legs and occasionally by the face or the unmentionables.

Out in front, the key to the game, in common with most sports that involve two teams and a ball, would appear to be movement.

Every time Britain had the ball, an iron curtain of yellow would be draped around the D-zone and the hosts would struggle to find a way through. When Sweden were going forward, attackers would jink, pivot and snipe and the British curtain would become torn.

There are handball clubs around the country whose websites have crashed

Within eight minutes, GB were 8-2 down, having been beaten 44-15 in their opening game against defending champions France. But either the British fans were unable to locate the scoreboard or they had, as Williams suggested, got a whiff of that bulldog spirit.

"If the crowd can sense that, we've done a job, and that was one of our goals," said Williams. "We want to be the legacy sport and we're well on the way to doing that. I've had so many random people say 'wow, I can't believe I've never heard of this before, it's my new favourite sport'.

"There are handball clubs around the country whose websites have crashed. We had 1.5m viewers for the France game on BBC Three. In 10 years' time we can be at this level, competing with the best, I have 100% confidence in that."

Up next for Williams and the GB handball boys are Argentina on Thursday, a fixture that always comes with spice, whatever the sport.

"Will it be a bit feisty?" says Williams. "Of course. But we're hoping, with the support behind us, we can get the win. That would top the six years off perfectly."

And perhaps, up in the stands at the Copper Box, will be a pie-eyed kid sat with his mum and dad, inspired to take up the sport. Sounds corny, doesn't it? But whoever said sport was supposed to be cynical?