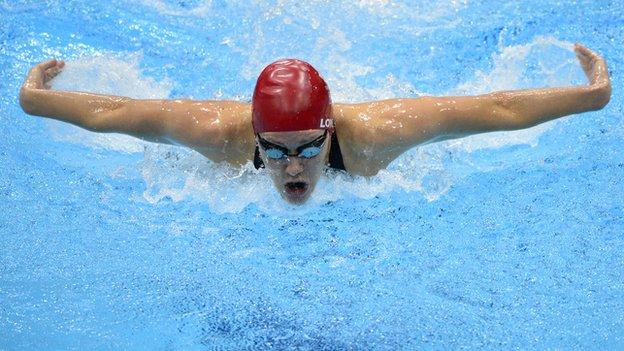 Welsh swimmer Jemma Lowe will throw all her energy into bidding for gold in Wednesday's 200m butterfly final at London 2012.

Lowe, 22, was the slowest of eight qualifiers, but her personal best would have made her the fastest heading into the final.

"I'm just going to give it absolutely everything and see what it brings," Lowe said.

Lowe's race is scheduled for 20:12 BST at the Aquatics Centre.

In 2011 Lowe set a personal best of two minutes 5.36 seconds and in her London Olympics semi-final the United States' Kathleen Hersey topped the pre-final rankings with two minutes 5.90 secs.

The first semi-final was won by China's Liuyang Jiao in two minutes 6.10 secs giving Lowe hope ahead of the final.

"I didn't know whether I was going to be in there when I finished fifth [in the heat]," she said.

"I was beginning to get a bit worried. I should have tried that little bit harder.

"But that's perfect. My coach didn't want me to get in the middle lanes in the final and I just sneaked in there. So I think I'm really lucky and it's meant to be so I'm ready now.

"The finals are normally not quite as fast as the semi-finals, but you never know so I'm just going to give it absolutely everything and see what it brings."

Lowe, who swims for Swansea, reached Tuesday evening's semi-finals by qualifying third fastest from the four heats with a time of two minutes 7.64 secs.