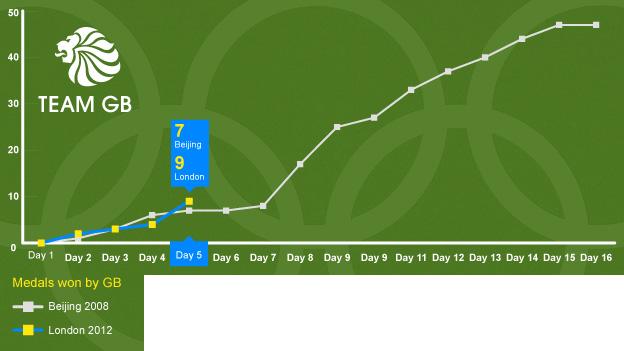 A sport-by-sport round-up of how every Team GB athlete performs on Day Five of the 2012 Olympic Games in London.

Britain finished the day on a total of nine medals, compared with seven at this stage at Beijing in 2008, and are 11th in the medal table.

Amy Oliver loses in the round of 32 of the women's individual tournament as Ika Yuliana Rochmawati of Indonesia wins 7-1.

Alan Wills goes out in the round of 64 in the men's individual tournament, losing 6-5 to Taylor Worth of Australia.

The women's side suffer a third straight defeat, losing 67-61 to Russia, and are bottom of their group.

The men's pairing of John Garcia-Thompson and Steve Grotowski are defeated 2-0 by their counterparts from Norway.

Luke Campbell beats Jahyn Vittorio Parrinello of Italy 11-9 to advance into the quarter-final of the men's bantamweight (56kg) event.

Richard Hounslow goes out of the men's single kayak slalom at the semi-final stage, with a score of 104.30.

Emma Pooley finishes sixth in the women's trial, while Lizzie Armitstead finishes in 10th position. They set times of 38:37.70 and 39:26.24 respectively.

Chris Mears and Nick Robinson-Baker finish fifth in the final of the men's 3m springboard, setting a score of 432.60.

The men's side advance into the quarter-finals of the tournament after Danny Sturridge's solitary goal gives them a 1-0 win over Uruguay.

The women's side suffer their third successive defeat after being beaten 30-17 by Brazil.

The men's side earn a 2-2 draw against South Africa. Ashley Jackson scores two goals including a late equaliser with three minutes remaining.

Sally Conway's campaign in the women's -70kg category ends with defeat to Edith Bosch of the Netherlands in the last 16.

Winston Gordon is knocked out in the last 16 of the men's -90kg by Russian Kirill Denisov.

Helen Glover and Heather Stanning win GOLD in the women's pair with a time of 7:27.13.

The women's quadruple sculls team of Debbie Flood, Frances Houghton, Beth Rodford and Melanie Wilson finish last in their final with a time of 6:51.54.

The men's quadruple sculls team of Charles Cousins, Stephen Rowbotham, Tom Solesbury and Matthew Wells are through to the final after finishing third in their semi-final with a time of 6:05.71.

Men's pair George Nash and Will Satch reach Friday's final, winning their semi-final with a time of 6:56.46.

Paul Goodison places 4th and 9th in his two races in the laser, leaving him in sixth position at the halfway stage of the series.

Lucy Macgregor, Kate Macgregor and Annie Lush lose to New Zealand in today's match race in the Elliott 6m leaving them joint fifth in the standings.

Steve Robinson and Ben Rhodes finish 4th and 2nd in today's races in the 49er, putting them in fifth in a tight field.

Bryony Shaw finishes 4th and 9th in her two races in the Women's RS-X, leaving her sitting in sixth.

Nick Dempsey finishes 5th and 1st in the Men's RS-X to leave him in third place with four of ten races completed.

James Goddard and Joe Roebuck are through to Wednesday night's men's 200m individual medley semi-finals with heat times of 1:58.56 and 2:00.04 respectively.

Fran Halsall finishes fourth in the women's 100m freestyle semi-final with a time of 53.77 to reach the final. Amy Smith misses out after clocking 54.28.

Marco Loughran and Chris Walker-Hebborn finish seventh and eighth in their heat of the men's 200m backstroke with times of 1.58.72 and 1:59.00 respectively.

James Goddard finishes third in the 200m individual medley semi-final behind Ryan Lochte and Michael Phelps with a time of 1:58.49 to reach the final.

Joe Roebuck finishes seventh in the other 200m individual medley semi-final with a time of 1:59.57 and misses out on the final.

Andy Murray fights back from losing the first set to beat Marcos Baghdatis of Cyprus 4-6 6-1 6-4 and reach the men's singles quarter-finals.

The mixed doubles first round between Andy Murray and Laura Robson and Czech pair Lucie Hradecka and Radek Stepanek has been cancelled for the day. It will now take place on Thursday.

The women's side lose 3-0 to Italy in their third group game.

The women's side are thrashed 16-3 by Australia in their second game and are bottom of Group B.

Jack Oliver finishes fourth in Group B of the men's 77kg, lifting 140kg in the snatch and 170kg in the clean and jerk.

Natasha Perdue finishes 12th in the women's 69kg final, lifting 92kg in the snatch and 113kg in the clean and jerk.