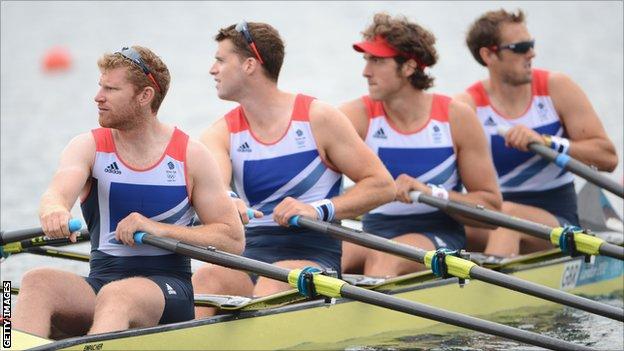 Hexham's Matt Wells has said a third-placed finish was enough as they became the first Great Britain quadruple scull crew to qualify for an Olympic final.

The quartet produced the fastest last 500m of all the crews to secure third behind Croatia and Australia.

"This event is very tight and where you qualify for the final is different from race to race," Wells told BBC Sport.

"To finish anywhere between first and third is fantastic, and we can look to where we can go from here."

Qualification was aided by good conditions for a relatively new team, who having finished seventh at the World Cup in Belgrade, have now followed up fourth at the Munich competition with an Olympic final on home water.

They were able to overhaul the Russians, who had led from early on, and almost caught the Australians for second.

"There was a nice strong headwind and British teams always do well in those conditions," team member Charles Cousins added.

"We had a solid rhythm and we were really moving at the halfway position when we were confident we could qualify for the final."

Tom Solesbury added: "We were very confident in what we were doing.

"The race plan was crystal clear and we executed it well."