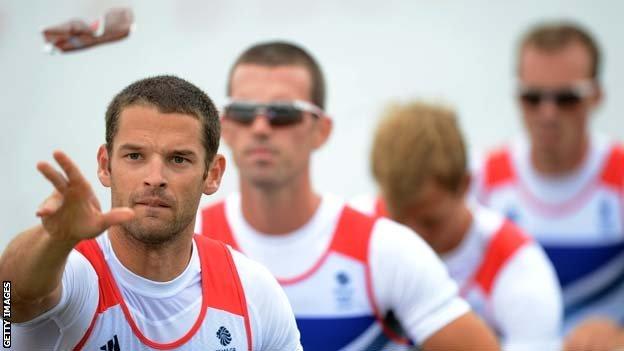 Chris Bartley has become the first Welsh competitor to win a medal at the London Games, but it was silver rather than the hoped-for gold.

Bartley and the GB lightweight four crew lost out to South Africa in a thrilling finish at Eton Dorney.

However, hopes of a rowing gold for a Welshman have been kept alive by Tom James in the GB four boat.

And cyclist Geraint Thomas was in majestic form as he set a new world record in cycling's team pursuit.

Bartley and his four crew had been favourites for gold after emphatic performances on their way to Thursday's final.

But in a tight race in windy conditions, South Africa held off their late challenge to take gold, with Denmark third after leading most of the way.

Earlier, James's crew secured an important psychological battle over main rivals Australia to win the semi-final in five minutes 58.26 seconds by half a length.

The two crews will line up again on Saturday for the medal race. The other nations in the final will be Netherlands, United States, Greece and Germany.

James is defending the title he won four years ago in Beijing, and before the semi-final he had said Australia were favourites to take gold.

Victoria Thornley and the GB women's eight trailed home in fifth in the final, although a strong finish took them ahead of Australia in a race which saw the United States retain their Olympic title.

Another gold medallist in Beijing, Thomas, began the defence of his title with the GB team pursuit quartet in magnificent fashion.

The British team, who set the world record in winning April's Track Cycling World Championships in Melbourne, went 0.796 seconds faster on the opening day of action on the track.

Later, Sarah Thomas will continue with the women's hockey team, looking for a third consecutive win in Pool A when they face Belgium.