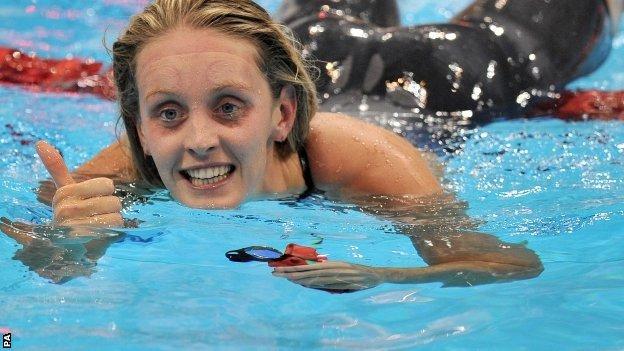 Britain's Fran Halsall qualified fifth fastest for Thursday's 100m freestyle final after improving on her earlier efforts in the heats.

The 22-year-old clocked 53.77 seconds in the semi-final, with Dutchwoman Ranomi Kromowidjojo fastest in a new Olympic record of 53.05secs.

Fellow Briton Amy Smith finished eighth in 54.28secs, but James Goddard made it into the 200m individual medley final.

Goddard was third in his semi-final behind Ryan Lochte and Michael Phelps.

"I'd take finishing behind those two in the final yeah," he told BBC Sport, "but I need to go a lot quicker than that.

"I have worked on my freestyle the last few months and I am hoping it will pay off. I am not swimming as fast as I'd like but I need to sit down with my coach and see what we need to do to go faster."

Looking ahead to her final, Halsall said: "Tomorrow it will take a 52secs to win it. I felt awful this morning but tonight felt really smooth and easy and I cruised the last 10m.

"Anything can happen in an Olympic final and I'm in it to win it.

"The crowd were amazing, but it was just as amazing for Missy Franklin. Any Brits that come tomorrow, I want you to shout louder than the Americans did!"