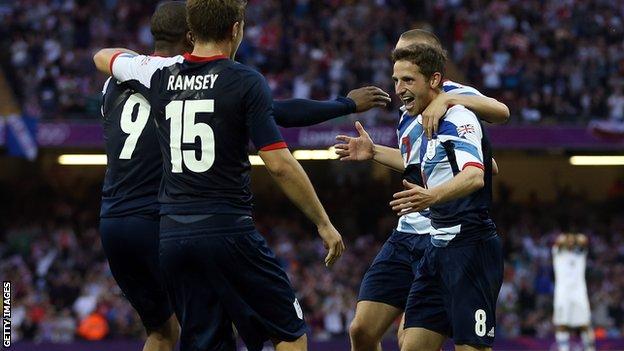 Joe Allen and Aaron Ramsey have hailed the Millennium Stadium crowd after Great Britain secured an Olympic quarter-final spot with a 1-0 win over Uruguay.

Allen set up Daniel Sturridge for the only goal in front of over 70,000 in Cardiff.

Stuart Pearce's side face South Korea at the same venue on Saturday.

"The support was incredible and I'm sure it will be again in that game," Allen said.

"[It's] fantastic to have done it in my home nation [with] the other Welsh boys. I think that's an added feeling and it will add to the special occasion.

"To beat a massive team in world football like Uruguay is a great achievement and we were confident we could do it and we've shown that."

Craig Bellamy captained a side which included four starting Welshmen - Allen, Ramsey and Neil Taylor with Ryan Giggs on the bench.

The game at the Millennium Stadium followed Great Britain's matches at Old Trafford and Wembley.

"We get to stay in Cardiff and obviously being Welsh as well I'm delighted that we got the win here. The support was magnificent.

"We've come so far in a short space of time and we're delighted with topping the group."

Allen started all three of Great Britain's Group A matches at London 2012 and provided the assist for Sturridge to score from close range just before half-time against Uruguay.

While Allen has been on Olympic duty with Great Britain there has been much speculation about his club future.

Current employers Swansea City have rejected an initial bid from Liverpool for the 22-year-old midfielder.

Allen has once again refused to comment on his club future in order to concentrate on his Olympic commitments.

"I'm here to represent Team GB and that's my only focus and only thought at the moment," Allen added.

"I'm just looking forward to going through the group stages into the next round."

Great Britain face South Korea in Saturday's quarter-finals with the winners facing Brazil or Honduras in the semi-final at Old Trafford on 7 August.