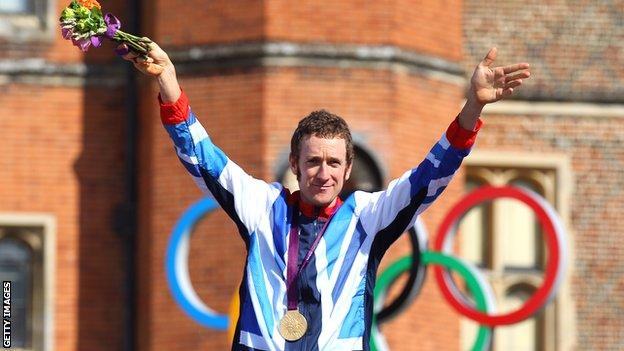 Bradley Wiggins is one of Great Britain's greatest athletes of all time, according to the chairman of the British Olympic Association.

The cyclist and seventh medal in total, in Wednesday's time trial.

"He is now unquestionably one of the greatest athletes we have seen in any discipline in the history of Team GB," said Lord Moynihan.

The 32-year-old's achievements, which span four Olympics, can now be ranked in the same bracket as rower Sir Steve Redgrave, who clinched gold medals in five consecutive Games, according to Moynihan.

"He is right up there at the top and is now in hallowed territory - others would join him there, not least Steve Redgrave," Moynihan added.

"What a great summer he has had and he deserves a lot of relaxation and enjoyment."

"Bradley Wiggins has cemented his position as one of the greatest British Olympians ever," he said.

"To claim an Olympic gold medal and the Tour de France championship in the span of less than four weeks is nothing short of extraordinary."

"The main number is that is gold number four," he said. "So I have got to carry on to Rio now and make it five.

"Just to be mentioned in the same breath as Sir Steve Redgrave and Sir Chris Hoy is very special."