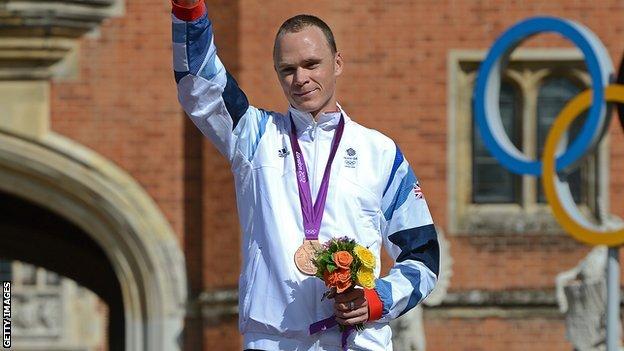 How he did it: With all eyes on Bradley Wiggins, Froome quietly got on with the task of getting himself on to the podium. Any hopes of a cycling one-two at the Games were dashed as Germany's Martin split the pair, showing why he is a world champion.

Interesting fact: Froome was actually born and raised in Kenya but switched his nationality and began riding for Team GB in 2008.

How they did it: After coming through the repechage to reach the final, Great Britain's men's eight pushed Germany for most of the race before the world champions pulled away and a late surge from Canada moved them down into third.

What they said: "I had an amazing rush of adrenalin and I thought this really could come true. The crowd was so amazing, so loud but we didn't have anything left and the Germans came back at the end." Greg Searle

Interesting fact: Greg Searle won gold in the coxed pairs at the 1992 Barcelona Olympics with his brother Jonny.

How they did it: Claiming Great Britain's first Olympic medal in team gymnastics for 100 years, Louis Smith and his team-mates were initially awarded the silver medal until a successful appeal saw Japan jump from fourth to second. However, the GB team still surpassed all expectations by winning bronze.

What they said: "For all these guys, their first Olympic Games, to get a medal is unbelievable. Silver? Bronze? It doesn't matter. We enjoyed it. It was fantastic." Louis Smith

"It's what dreams are made of. All I could think about was winning an Olympic medal when I was younger. Silver would've been nice but I couldn't complain at all right now. We're in London, it's once in a lifetime and we've made the most of it." Kristian Thomas

How she did it: Starting the final in lane eight, defending champion Rebecca Adlington battled back from sixth place at the halfway point to claim bronze behind Allison Schmitt of the USA and France's Camille Muffat, who set a new Olympic record.

"We said if she was there or thereabouts, she was the person for the closing stages. That is her strength. Give her an opportunity and she will take it. A fantastic performance from Rebecca - what a gutsy swim."

What she said: "Twelve years' hard work has gone in to that. I'm so glad I've got a medal at a home Games. Not many people can say that."