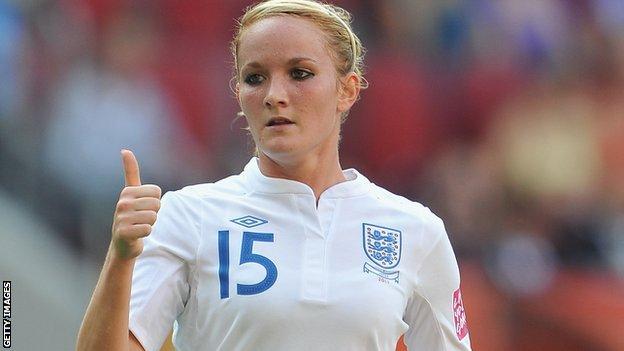 Sophie Bradley says confidence is flowing through Great Britain women's football team having cruised into an Olympic quarter-final against Canada with three victories from three games.

The Lincoln Ladies centre-half is likely to partner club team-mate Casey Stoney in Friday's game at the Ricoh Arena, following an injury to Scotland's Ifeoma Dieke.

"We have been playing brilliantly since the tournament started," Bradley said.

We got a lot of confidence beating Brazil who were silver medallists last time around. We had such a good team performance

"We have improved and improved."

Bradley, who was born in Nottingham, said Tuesday's win over Brazil at Wembley was special, but not just for the impressive display.

"We are all positive after that game," Bradley, 22, said.

"We got a lot of confidence beating Brazil, who were silver medallists last time around. We had such a good team performance.

"It wasn't any individuals that saw us win the game, it was just a really great team performance.

"A lot of people have been saying to me that it was the best game of women's football they have ever seen, and it is so exciting."

Bradley, who only returned to action for Lincoln in June after an ankle injury, says the atmosphere at England's national stadium - as well as Team GB's medal success - has provided great inspiration in their quest for London 2012 glory.

"The crowd were absolutely unbelievable. At times you caught yourself having a look around," Bradley added.

"It has been brilliant to watch [Team GB begin to win medals] and now we really want a piece of it ourselves."