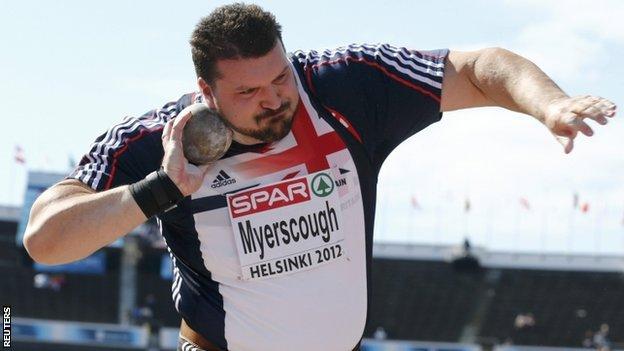 Britain's Carl Myerscough is out of the shot put competition after finishing 29th in qualifying on Friday.

Myerscough's best of 18.95m was more than a metre below his season's best.

The 32-year-old was allowed to compete after the British Olympic Association's lifetime ban on athletes who tested positive for drugs was overturned by the Court of Arbitration for Sport.

"It's not exactly how you dream and prepare for it to go, but I'm just glad I got to partake in this," he said.

"Maybe if I had relaxed a little more, but I'll have a lifetime to reflect on that."

The Lancashire-born athlete, who is now based in California, missed the Olympics in 2000, 2004 and 2008 because of his doping ban.

"It was a once in a lifetime feeling out there," added the British record holder. "I just didn't get one together, it's very frustrating. I'm massively disappointed because I was in great shape."

Myerscough's hopes of competing in London were looking slim when he missed out on qualifying for the shot put final at the European Championships in Finland.

However, four days later the Blackpool-born athlete threw 20.13m in Estonia to surpass the Olympic 'B' standard for a second time this year and his efforts were applauded by UK Athletics head coach Charles van Commenee.

Myerscough had been banned from the Olympics after testing positive for anabolic steroids in 1999, but was free to compete at London 2012 after the BOA ban was overturned.