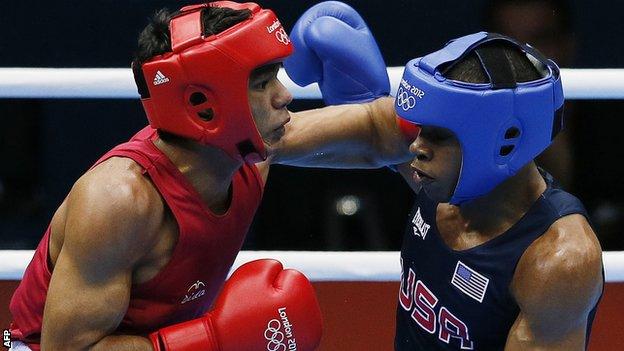 The United States men's boxing team have been eliminated from all divisions - the first time they have failed to win a boxing medal at the Olympics.

The US went to London with the biggest boxing squad but none of their nine fighters have made it to the last eight.

Welterweight Errol Spence was the last boxer to go out, losing 13-11 to India's Krishan Vikas on Friday.

"It's disappointing because we expected to come home with medals and we didn't so it's kind of a sad day," he said.

"I feel like I let down a lot of people, my family and the people that is at home."

The US hope their three female fighters can salvage some pride for a country that has won a record 48 boxing golds.

Flyweight Rau'shee Warren, who lost to France's Nordine Oubaali on Friday, said: "We still have the girls as long as they don't get any bad decisions or stuff like that."