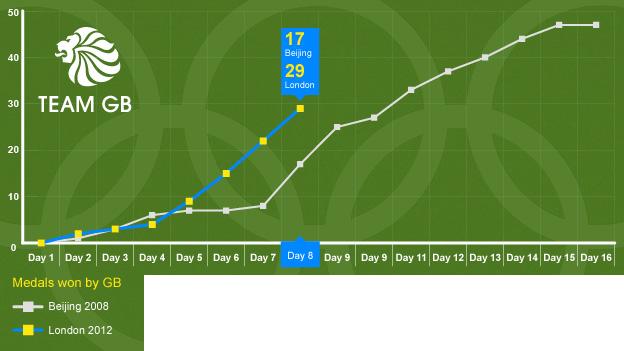 A sport-by-sport round-up of how every Team GB athlete performs on Day Eight of the 2012 Olympic Games in London.

Britain finished Day Eight on a total of 29 medals, compared with 17 at this stage at Beijing in 2008, to put them third in the medals table.

Jessica Ennis clinches GOLD in the heptathlon after winning the 800m. She came home in 2:08.65 to secure the victory. She earlier achieved 6.48m with her third attempt in the heptathlon long jump and threw a personal best of 47.49m in the javelin.

Katarina Johnson-Thompson comes second in her 800m heptathlon heat with a personal best of 2:10.76 to come 14th in the final standings. She earlier leaped 6.19m in the long jump and threw 38.37m in the javelin.

Christine Ohuruogu finishes second in her 400m semi-final with a season's best of 50.22 to go through to tomorrow's final. Both Shana Cox and Lee McConnell finish seventh in their respective semi-finals.

Dai Greene finishes fourth in his semi-final of the 400m hurdles but his time was good enough to qualify for Monday's final. Rhys Williams also comes fourth but did not qualify from his semi, while Jack Green fell and did not finish.

James Dasaolu is third in heat three of the men's 100m first round with a time of 10.13 seconds. Adam Gemili comes second in heat five in 10.11 and Dwain Chambers wins heat seven in 10.02 as all three progress to the semi-finals.

Nigel Levine comes third in heat five of the men's 400m in 45.58. Conrad Williams is third in heat six with 46.12 and Martyn Rooney runs 45.36 to come second in heat seven. All three qualify for the semi-finals.

Barbara Parker finishes sixth in the first heat of the women's 3,000m steeplechase in 9:32.07. Eilish McColgan finishes her heat in ninth with 9:54.36. Both go out.

Holly Bleasdale qualifies joint fourth on 4.55m to go into the pole vault final. Kate Dennison can only clear 4.25m before a nasty fall and goes out.

Tom Stalker heads into the light-welterweight quarter-finals after winning his round of 16 bout 20-16.

Dani King, Laura Trott and Jo Rowsell win GOLD and set a world record of 3:14.051 in the women's team pursuit final, beating the record they had set in the previous round. That means Team GB's track cyclists have racked up six straight world records, and nine in total so far at the Games.

Ed Clancy is fourth in the men's omnium standings after he picked up 5 points in the elimination race. He earlier grabbed 11 points in the 30km race and won the flying lap, with a time of 12.556.

Jason Kenny records a time of 10.363 seconds to win in the round of 16 for the men's sprint, putting the Brit through to the quarter-finals tomorrow. He earlier broke the Olympic record and was fastest in the men's sprint qualifying with a time of 9.713 seconds.

Hannah Starling missed out on the 3m springboard final by 0.75 points, finishing with a score of 313.95. Team-mate Rebecca Gallantree finished bottom of the semi-final standings with a score of 267.10.

Nick Skelton riding Big Star and Ben Maher on Tripple X are among 32 riders with a clear round in the first qualifier of the individual jumping. Scott Brash on Hello Sanctos is joint 42nd with 4 faults. Peter Charles accumulates 10 faults on Vindicat and is eliminated.

Team GB were beaten in a penalty shootout 5-4 by South Korea after drawing 1-1 after extra time.

Kat Driscoll is ninth in qualifying with a score of 100.985 on the trampoline and does not make the final eight.

The women suffered a shock 2-1 defeat to China to leave them second in Group A with one match left to play.

Katherine Copeland and Sophie Hosking win GOLD with an emphatic victory in the women's lightweight double sculls, recording a time of 7:09.30.

Hannah Mills and Saskia Clark finished fourth in race three and sixth in race four to leave them second in the overall standings for the women's 470.

Nick Dempsey finished second in race seven and third in race eight of the Men's RS:X to leave him second in the overall standings.

Men's 470 pair Luke Patience and Stuart Bithell finish third in race five and fourth in race six to see them slip to second in the overall standings.

Defending men's Laser champion Paul Goodison is ninth in race nine and eighth in race ten, leaving him sixth overall and out of contention with just the medal race to go.

Bryony Shaw finishes seventh in race seven and fifth in race eight of the Women's RS:X, leaving her sitting in seventh overall.

Alison Young is disqualified from race nine of the Laser Radial and is fourth in race ten and now sits fifth with the medal race remaining.

Lucy MacGregor, Kate MacGregor and Annie Lush lose to the Netherlands in today's match race in the Elliott 6m leaving them seventh in the standings.

Jennifer McIntosh finishes the women's 50m rifle 3 positions elimination round in 42nd place with a score of 570 and goes out.

Charlotte Kerwood comes 16th in qualification for the women's trap with 64 and does not progress.

Andy Murray and Laura Robson reach the mixed doubles final with a 10-7 champions tie-break win, beating their German opponents 2-1 in sets in the semi-final. The victory guarantees the pair at least a SILVER. The pair had won their earlier quarter-final 2-1.

In group A the men suffer their fourth defeat in a row, losing 3-0 to Poland, and remain bottom with a game to go.

Peter Kirkbride finishes with a total of 328kg in the men's 94kg and comes 16th overall.