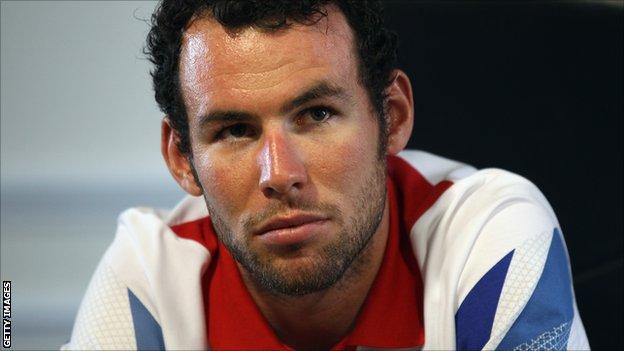 British cyclist Mark Cavendish has revealed he wants to return to the track for the 2016 Olympics in Rio.

Cavendish, 27, was the only member of the GB team not to win a medal in the velodrome at the 2008 Games.

He chose to concentrate on road cycling soon after, but missed out on an Olympic medal last weekend.

"I've got aims now," Cavendish told BBC Sport. "I've seen how the guys [Team GB cyclists] have worked together and to be part of that would be special."

Cavendish has won 23 stages on the Tour de France to lie fourth on the all-time list of stage winners and is the current BBC Sports Personality of the Year for his efforts on the road.

He was also part of the Sky team that helped Bradley Wiggins become the first British winner of the Tour de France.

But having watched his GB team-mates record multiple success in the London Velodrome this week, he says the chance to finally win an elusive Olympic medal is proving to be a huge draw.

"I've been texting the guys, speaking to them, and I'd like to be in Rio with them," added Cavendish. "But I'll have to see how it goes because there are other people pushing to be in the team also."