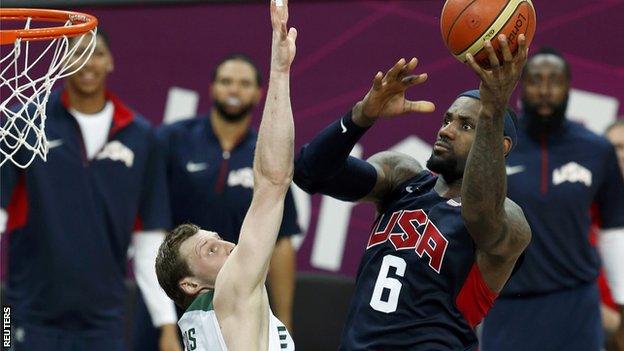 LeBron James went on a late scoring spree to lead the United States to a narrow 99-94 victory over Lithuania.

The NBA's 2012 MVP scored nine points in the last four minutes as the US came through their first real test of the Olympics after three easy matches.

Lithuania led 82-80 with less than six minutes to when James hit a three-pointer and demoralising dunk.

"I've played in the biggest games. I love it when every possession counts, when every bucket counts," he said.

The Miami Heat star believes the US will learn more from their narrow victory than their record-breaking 156-73 rout of Nigeria on Thursday.

"For us as competitors, we want to have a test game," said James.

US coach Mike Krzyzewski praised the eight-time NBA All-star after admitting his side had been up against it.

"He took the game over," said Krzyzewski. "For those people who say he doesn't produce at the end of ball games, he's always produced for us.

"He was terrific. He made the plays that were needed. You can't practice those situations and to see him respond like that is one of the great positives from today."