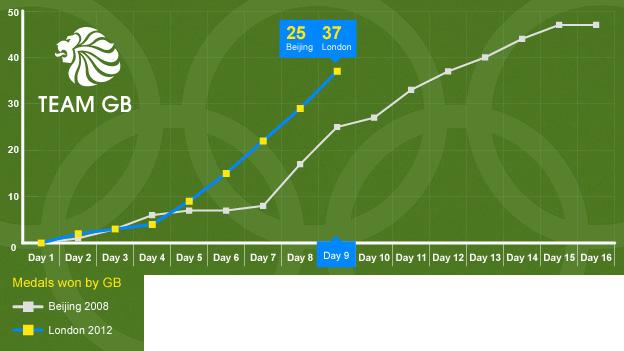 A sport-by-sport round-up of how every Team GB athlete performs on Day Nine of the 2012 Olympic Games in London.

Britain finished Day Nine on a total of 37 medals, compared with 25 at this stage at Beijing in 2008, leaving them third in the medals table.

Christine Ohuruogu runs a superb race from lane eight to win SILVER in the women's 400m. The defending champion is sixth coming off the final bend but finishes strongly to finish behind United States' Sanya Richards-Ross in 49.70 seconds.

Robbie Grabarz jumps 2.29m to top group B and qualify for the final of the high jump. His mark equals the best set by five other jumpers.

Paula Radcliffe's replacement Freya Murray finishes the women's marathon in 44th place with a time of two hours, 32 minutes and 14 seconds. Claire Hallissey is 57th with 2:35.39. Mara Yamauchi pulls up with an injury at about the 9.4km mark and does not continue.

Eilidh Child and Perri Shakes-Drayton qualify for Monday's semi-finals in the women's 400m hurdles. Child finishes third in her heat with a time of 56.14 seconds, while Shakes-Drayton won her race in a time of 54.62secs.

Ross Murray and Andrew Baddeley miss out in the semi-finals of the men's 1500m final. Murray finishes 10th in his heat in a time of 3 minutes 44.92 seconds. Baddeley finishes eighth in his race with a time of three minutes 36.03 seconds.

Conrad Williams, Nigel Levine and Martyn Rooney fail to make it out of the semi-finals for the men's 400m. Williams finishes last in his race with a time of 45.53 seconds, Levine places 6th in his with 45.64secs and Rooney finishes fifth in the final with a time of 45.31.

Yamile Aldama saves her best jump for last in the women's triple jump, her leap of 14.48m seeing her finish fifth in a competition won by Kazakhstan's Olga Rypakova.

GB's women finished their first-ever Olympic campaign without a win after their 66-78 defeat to Brazil. Natalie Stafford top-scores with 15 points for GB.

Luke Campbell becomes the first British boxer to guarantee a home medal with a close 16-15 points win over former world champion Detelin Dalakliev of Bulgaria. The Hull bantamweight trails by a point going into the final round before coming through to the semi-finals.

Natasha Jonas makes history as Britain's first female boxer to compete at the Olympics, beating Quanitta Underwood of the United States 21-13 in the lightweight division last 16.

Ed Clancy takes BRONZE in the men's omnium with 30 points overall behind Norway's Lasse Norman Hansen in first and Bryan Coquard of France.

Victoria Pendleton is into the quarter-finals of the women's sprint with victory over Willy Kanis of the Netherlands. Earlier she sets an Olympic record of 10.724 seconds in qualification.

Jason Kenny wins races one and two of the men's sprint quarter-finals to go through to the semis where he will face Trinidad and Tobago's Njisane Nicholas Phillip.

In the individual jumping second qualifier, Nick Skelton riding Big Star and Ben Maher on Tripple X remain among the top 12 riders with clear rounds over the first two days. Scott Brash on Hello Sanctos is joint 31st with eight faults. Skelton, Maher and Brash also ride as Team GB and are joint second in the team event behind Saudi Arabia.

Richard Kruse, James Davis, Husayn Rosowsky and Laurence Halsted lose 45-40 to Italy in the quarter-final of the men's team foil. They go on to beat France 45-29 but lose to Russia 45-35 as they finish sixth.

Louis Smith wins SILVER in the men's pommel horse with a score of 16.066 behind Krisztian Berki of Hungary. Berki receives the same score as Smith but the Hungarian takes gold because of a fractionally higher execution score.

Max Whitlock takes BRONZE behind Smith in his first Olympics with a superb 15.600, having qualified for the final in eighth place.

GB's women are beaten 37-14 by Australia in their final pool match, leaving them without a victory and bottom of group A.

GB's men come back from three goals down to draw 3-3 with Australia. They sit second in Group A with one match to play.

Ben Ainslie wins GOLD in the men's Finn after beating main rival Jonas Hogh-Christensen of Denmark in the medal race. Both finish the regatta on 46 points but Ainslie's better placing in today's race means he is Olympic champion.

Iain Percy and Andrew Simpson take SILVER behind Sweden in the men's Star, beaten into eighth place in the medal race and scoring 34 points overall, two behind Sweden.

Nick Dempsey is ninth in race nine and second in race 10 of the men's RS:X and is now second overall ahead of the medal race.

Bryony Shaw wins race nine of the women's RS:X, and is fifth in race 10, leaving her in seventh overall with just the medal race to go.

Stevie Morrison and Ben Rhodes place 13th in race 12 and third in race 13 of the men's 49er, and lie third overall.

Saskia Clark and Hannah Mills win race five and are sixth in race six of the women's 470 and are top of the overall standings.

Ed Ling scores a perfect 25 in round three of the men's trap qualification and lies 15th overall with a total of 72 from a possible 75. The final two rounds take place on Day 10.

Olivia Federici and Jenna Randall are ninth of 24 after the duets technical routine qualification with a score of 88.100.

Andy Murray and Laura Robson take SILVER in the mixed doubles final against top seeds Max Mirnyi and Victoria Azarenka of Belarus, after losing 2-6 6-3 10-8 in a champions tie-break.

GB's women are beaten 3-0 by Japan in their final pool match and finish fifth of six in Group A.

GB's women bow out of the tournament with a creditable 9-7 defeat at the hands of Spain in the quarter-finals.