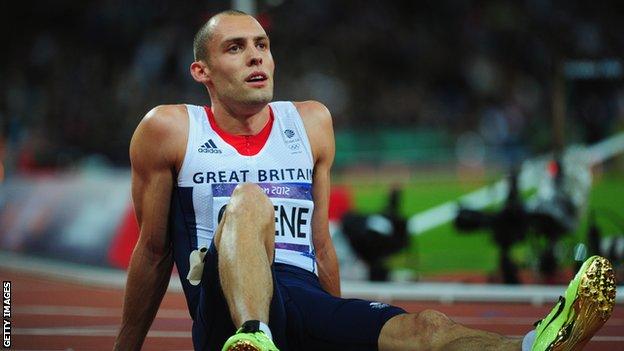 Dai Greene's dreams of Olympic gold were dashed after he finished fourth in the 400m hurdles final.

The Dominican Republic's Felix Sanchez won in 47.64 seconds, eight years after he won gold in Athens.

American Michael Tinsley was second with Puerto Rico's Javier Culson securing bronze, while Greene finished out of the medals in fourth.

"I gave it everything I had but was just too tired and narrowly missed out," Greene said.

"I know me and Culson were miles ahead in the rankings but the guys really pulled something out."

Greene, the world champion, feared his Olympic dream was over on Saturday when he was fourth in his semi-final, but his time was quick enough to progress.

Earlier in the day discus thrower Brett Morse went out in the qualifying round, posting 58.18m in between two fouls.

And Gareth Warburton also went out in the heats of the 800m.

Morse, from Penarth, failed in his first attempt to meet the designated qualifying distance to progress to the final, or be among the top 12 throwers, earning a red flag as his toes strayed over the edge of the circle.

His only successful throw came at the second attempt, but he overstepped the circle again on his third and final effort and he departed the Olympic Stadium having failed to reach anywhere near his personal best of 66.06 metres.

Morse said: "I'm in a lot better shape than that - I've been throwing very well in my training camp in Loughborough so I'm very disappointed.

"I haven't been anywhere near my personal best this year either, which is disappointing.

"I'm actually in my best shape and my technique's a lot better... but for some reason in competition it just goes to pieces. It's frustrating."

Warburton, who won an appeal after initially being overlooked for the Great Britain team, raced in the third of seven heats.

But his Games ended with a fifth place in 1:46.97 behind Sudan's Kaki Abubaker.

The Caernarfon-bred runner said he felt no added pressure having been the only British competitor to successfully win a selection appeal.

"I felt like I deserved to be in the team just as much as everyone else," he said.

But he admitted to being unsure of why his performance left him off the pace.

"It's hard to know [why]. It's obviously been a long season. I started racing in April, having to qualify for these Games first and then having to peak again for the Games so it's hard."

At the women's hockey, Sarah Thomas played in Great Britain's final group game against Group A leaders The Netherlands, a 2-1 defeat.

Great Britain were already assured of a semi-final spot after China's hopes ended with a 1-0 defeat by Japan earlier in the day.