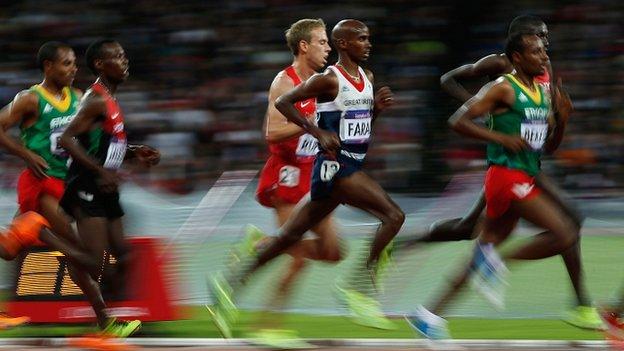 UK Sport set a target for Great Britain to win a minimum of 48 medals from at least 12 sports at the London Olympics, one more than in Beijing four years ago.

With 40 already in the bag after a sensational first week, the mission is well on track.

More than £300m has been invested in British Olympic and Paralympic sport over the last four years, but what can we expect in the final days of the Games?

BBC Sport examines which sports have hit their individual targets and which need to bring more medals to the party.

Critics might argue it is not for the masses, but the most richly-rewarded Olympic sport has justified its £27.3m expenditure in the build-up to London 2012.

A record haul of four golds, two silvers and three bronzes - from 13 events - has eclipsed a projected target of six medals, with the women's boats central to this success.

Even five-time Olympic champion Sir Steven Redgrave thinks it is a mark they will struggle to surpass, but as the country's rowers rest up in the Olympic village, they can at least reflect they have set the standard for other sports to follow.

Super Saturday gave UK athletics its best gold medal haul in 104 years, so the overall target of five to eight medals does not seem far off.

Golds for Jessica Ennis, Greg Rutherford and Mo Farah have been followed by silver for Christine Ohuruogu and a strong squad means there are still plenty of medal opportunities in the coming days.

Phillips Idowu looked on course for a medal before his recent injury worries. He goes in the triple jump on Tuesday, with the final on Thursday.

Farah could add to his 10,000m gold in the 5,000m on Saturday and there is also a chance in the men's and women's relays on Friday and Saturday.

As Rutherford has already shown in the long jump, a surprise is more than possible in front of a home crowd so there is hope too for Lawrence Okoye (discus), Shara Proctor (long jump) and high jumper Robbie Grabarz.

Team performance director David Brailsford has again been the architect of a stunning display at the Olympics. GB have won gold in four of the five track events contested so far, and along the way have set three world records.

That is without even mentioning the time trial success for Bradley Wiggins and Chris Froome and road race silver for Lizzie Armitstead.

There is still more to come, though, with Sir Chris Hoy (keirin), Victoria Pendleton (sprint) and Laura Trott (omnium) all looking for further Team GB golds on Tuesday.

The cycling team have already reached their goal of six to 10 medals and on current form there is little doubt that the top end of that target will be reached. Shanaze Reade will also hope to make up for her BMX disappointment in Beijing when she competes on Friday.

"I think they will get 54. That's 12% above their target and anybody would be happy with that kind of performance. Our sportsmen and women have really appreciated the support of the nation, and the nation has got value for money."

Britain's haul of three medals in the pool has been relatively disappointing, given that the 44-strong team have again relied on Rebecca Adlington for two of them. Michael Jamieson claimed silver in the 200m breaststroke.

GB won six medals in Beijing, with half coming from the open water events. Keri-Anne Payne is again a contender in the women's 10km race on Thursday. After the poor showing in the pool, the 2008 silver medallist can help reduce the damage as GB attempt to deliver a minimum of five medals at London.

Otherwise, an investment of £25.1m will look like money wasted compared to other big hitters such as rowing.

James DeGale was the toast of the British boxing team in Beijing as his gold was one of three medals in the ring four years ago.

That is the minimum target again and it has been reached already with Anthony Joshua, Anthony Ogogo, Luke Campbell and Nicola Adams all guaranteed medals after reaching their respective semi-finals.

They could still be joined in the last four by another three British boxers.

A first Olympic team medal for 100 years means Louis Smith and co have already over-achieved by winning four medals - their maximum goal before the Games was two.

The feelgood story in the British camp might have been tinged with some regret - Smith's silver in the pommel horse could easily have been gold, and the team lost out on silver only after a Japanese protest. But Beth Tweddle's first Olympic medal in the uneven bars put any of those uneasy feelings to bed.

Sailing - Ben Ainslie's success and silver for Star sailors Iain Percy and Andrew Simpson means Britain are coasting close to their goal of three to five medals. British windsurfers Nick Dempsey and Bryony Shaw will find out if they get medals on Tuesday. Stevie Morrison and Ben Rhodes are third in the 49er class while the men's and women's 470s are both second in their respective fields.

Triathlon - Also on Tuesday, brothers Alistair and Jonny Brownlee will be aiming to convert their World Series success into Olympic gold when they get set for Hyde Park.

Canoeing - Britain's Tim Brabants is the defending Olympic champion in the men's 1000m kayak - he struggled to reach the final but anything can happen on Wednesday. Ed McKeever will hope to make the final of the men's 200m kayak on Saturday, while Liam Heathand and Jon Schofield also have a chance the same day in the 200m kayak double.

Taekwondo - Lutalo Muhammad, who was selected after a long drawn-out row at the expense of Aaron Cook, fights in the men's -80kg Olympic taekwondo category on Friday. Also fighting that day is world champion Sarah Stevenson.