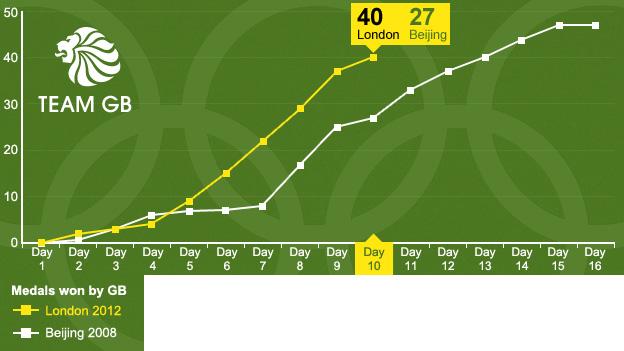 A sport-by-sport round-up of how every Team GB athlete performed on Day 10 of the 2012 Olympic Games in London.

Britain finished Day 10 on a total of 40 medals, compared with 27 at this stage at Beijing in 2008, keeping them third in the medal table.

America-born Briton Tiffany Porter qualifies for the semi-finals of the women's 100m hurdles after coming third in heat one with a time of 12.79 seconds.

World indoor bronze medallist Andrew Osagie is third in heat two of the men's 800m in a time of one minute, 46.42 seconds, qualifying automatically for the semi-finals. Gareth Warburton finishes fifth with 1:46.97 in heat three, while Michael Rimmer is fifth in heat five with 1:49.05. Both go out.

Lawrence Okoye throws 65.28 metres with his final attempt and goes through to the men's discus final. Abdul Buhari can only manage 60.08m, while Brett Morse's best throw is 58.18m, and both are out.

Margaret Adeoye and Abiodun Oyepitan are through to the semi-finals of the women's 200m after times of 22.94 and 22.92. Anyika Onuora's time of 23.23 is not good enough to take her through.

Holly Bleasdale finishes by clearing 4.45m in the pole vault final, and fails in all her attempts at 4.55m.

Perri Shakes-Drayton and Eilidh Child both go out of the women's 400m hurdles after clocking times of 55.19 and 56.03.

Dai Greene misses out on a medal after finishing fourth in the men's 400m hurdles with a time of 48.24.

The men's side beat China 90-58 in the final game to finish with one win from their five group games which is not enough to get them through to the next round.

Nicola Adams thrashes Stoyka Petrova of Bulgaria 16-7 in her quarter-final of the women's flyweight division and is through to fight India's Mary Kom in the semis. Adams is now guaranteed at least a bronze medal.

Natasha Jonas is out, beaten 26-15 by Irish gold medal hope Katie Taylor in the lightweight quarter-finals.

Savannah Marshall is out after being beaten 16-12 by Marina Volnova of Kazakhstan in the middleweight quarter-finals.

Anthony Agogo reaches the semi-final of the middleweight division after beating Stefan Hartel of Germany 15-10.

Anthony Joshua beats Zhilei Zhang of China, silver medallist in Beijing, 15-11 to reach the semi-final of the super heavyweight division.

Tim Brabants qualifies for Wednesday's final of the men's kayak single K1 1000m, finishing fourth in his semi-final in a time of three minutes 30.769 seconds. Earlier, he finished fifth in heat one, qualifying 13th fastest for the semi-finals in 3:31.869.

Richard Jeffries finishes last in the second semi-final of the men's canoe single C1 1000m with a time of 4:49.874 and will not be in the final.

Rachel Cawthorn, Jessica Walker, Louisa Sawers and Angela Hannah are into the final of the women's kayak four (K4) 500m, coming fourth in their semi-final with a time of 1:32.550.

Laura Trott finishes first in the opening discipline of the women's omnium, the 250m time trial. and 10th in the 80-lap points race. She wins the elimination sprint and leads the event after three races.

Victoria Pendleton reaches the semi-final of the women's sprint after beating Olga Panariva of Belarus 2-0.

Chris Mears claims the 18th and last place for the semi-final of the men's 3m springboard after scoring 436.05 points.Jack Laugher's 330 points is not enough to take him through.

The men's side beat Netherlands in the team jumping event final to secure a GOLD medal, with Peter Charles riding a perfect final round.

Beth Tweddle secures BRONZE in the women's uneven bars with a score of 15.916, behind winner Aliya Mustafina of Russia and China's Kexin He.

Kristian Thomas finishes eighth in the men's vault final after scoring 15.533 from his two attempts.

The men's side are beaten 41-24 by Iceland in their last group game to finish bottom, with no point and no wins from their five games and go out.

The women's side lose 2-1 to Netherlands in their last group game, but qualify for the semi-finals after coming second in their group.

Luke Patience and Stuart Bithell win race seven and are placed sixth in race eight of the men's 470, leaving them second overall.

Despite finishing third in the men's Laser medal race Paul Goodison is seventh overall at the end of the event.

Alison Young finishes the women's Laser Radial medal race in fourth place and is fifth overall at the end of the event.

Steve Morrison and Ben Rhodes are in fifth position of the standings going into the medal race.

James Huckle is 25th and Jonathan Hammond is last in qualifying for the men's 50m rifle three position. Neither go through.

Ed Ling scores 21 out of 25 in his final round of the men's trap qualification and is 21st overall so will not go into the final. Earlier in the competition he scored two perfect rounds.

Jenna Randall and Olivia Federici reach the final of the women's duets having finished in ninth position on 176.890 points.

The men's side lose 3-0 to Argentina in the last group game to finish bottom with no wins from their five games and go out.

The men's side lose 13-4 to Montenegro to finish bottom of their group, with no wins and no points from their five games.