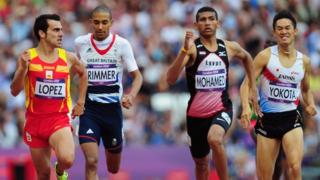 Great Britain's Gareth Warburton and Michael Rimmer fail to qualify from their heats in the 800m.

Rimmer and Warburton both finished in fifth position in their qualifying heats, but failed to qualify as fastest losers.

Andrew Osagie did qualify after finishing third position in his heat, behind world record holder David Rudisha of Kenya, and he will compete in the semi-finals on Tuesday.

Watch the full session on the BBC Sport Interactive Player.