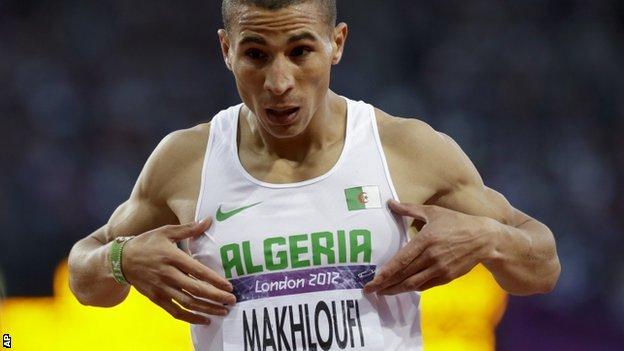 Algeria's Taoufik Makhloufi has been reinstated to the Olympics after being excluded for not trying in the 800m.

Makhloufi, who won one of Sunday's 1500m semi-finals, was forced to race in the 800m after Algeria failed to withdraw him before Sunday's deadline.

However, he completed just 200m of his heat before quitting.

"After reviewing evidence provided by the LOCOG [London 2012 organisers] medical officer, the disqualification from further participation in the athletics competition of the 2012 Olympic Games has been revoked," the IAAF said in a statement.

Earlier the IAAF had said the 24-year-old had "not provided a bona fide effort" and would be "excluded from further events".

Makhloufi lined up at the start of heat five of the 800m, but quickly fell behind the rest of the field then stopped running and wandered across the infield.

He had been touted as a medal contender in the 1500m after surging past Olympic and world champion Asbel Kiprop in Sunday's semi-final to record a time of three minutes 42.24 seconds.

It was the second exclusion at London 2012, following last Tuesday's disqualification of eight badminton players from the women's doubles competition after it was decided they were "not using one's best efforts to win".