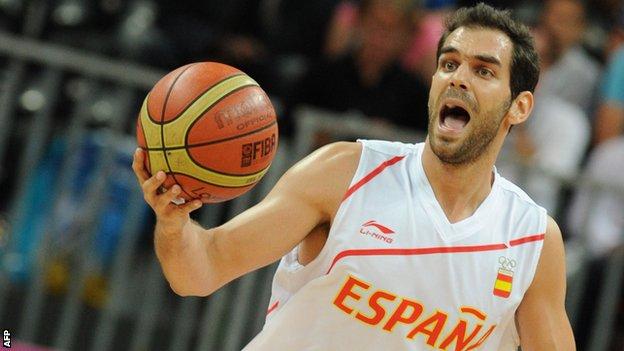 Spain's men's Olympic basketball team have denied their collapse in an 88-82 defeat by Brazil was a deliberate attempt to avoid a USA semi-final tie.

Spain lost their second successive game and were outscored 31-16 in the final quarter but will avoid the gold medal favourites if they reach the last four.

Four women's badminton pairs were thrown out of the Olympics accused of deliberately wanting to lose.

It is the second game in a row that Spain have suffered a fourth-quarter capitulation after they went from nine points up with four-and-a-half minutes to go to lose 77-74 against Russia.

Calderon, who plays for NBA side Toronto Raptors, said: "There have been some situations before when some teams have tried to avoid us and we don't like that.

"We're in the Olympics and you have to try to win every game, no matter who you play against. If you want a medal, you have to beat anybody."

"The press were talking about that [avoiding the USA] and it affected us. Now we have to forget this and focus on what comes next."

Spain finished third in Group B, meaning they will face France in Wednesday's quarters and, if they win, either Russia or Lithuania in the semis.