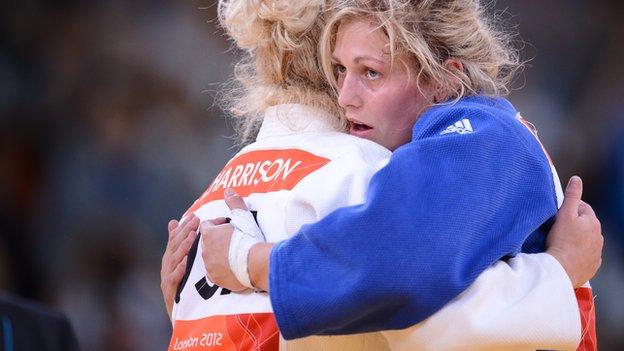 Olympic judo silver-medallist Gemma Gibbons has revealed that she was encouraged to fight on by medics after they discovered she had a broken thumb.

The 25-year-old injured her hand during her second bout as she claimed Great Britain's first judo medal in 12 years in the -78kg category.

"I thought I'd broken it but I was convinced by the medical staff that I hadn't," she told BBC London 94.9.

"They knew it was broken but decided it wouldn't get any worse."

She added: "It hurt a lot but I was told I was fine and encouraged to get on with it. I'm grateful they didn't tell me otherwise I'd have been worrying about it.

"I'll need an operation, but I've still got a smile on my face. Hopefully I'll be back on the mat in three to four months time."

Gibbons, who only started fighting in the -78kg category this year, admits she has not had much time to reflect on her success due to the media attention showered upon her since winning her medal last Thursday.

"The whole day is a bit of a blur still," she continued.

"I haven't had a chance to sit down and watch the fights back fully. Thinking back to what I achieved on that day, it's great.

"I always thought I could pull something like this out of the bag, but it hadn't happened up until now.

"For this to happen at this event - probably the most important and biggest in my life - is fantastic."

Gibbons hopes that winning her Olympic medal will help create a genuine legacy and inspire a new generation to take up the sport.

"I think it's the best sport in the world and I hope everyone has had the chance to see that and our participation rates go sky-high," she added.

"I really hope judo can get more coverage and a lot of people take it up. There are lots of kids out there who will enjoy the sport like I have done."