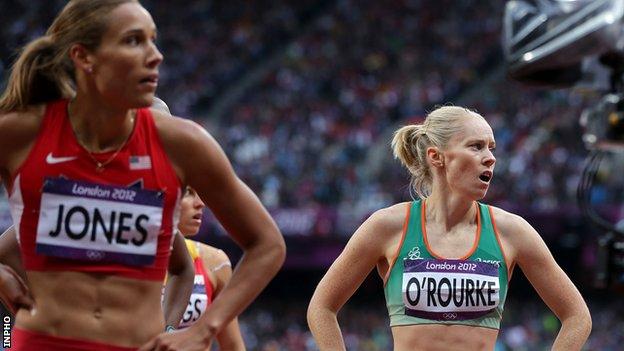 Derval O'Rourke missed out on a place in the women's 100m hurdles final in London after finishing fifth in her semi-final on Tuesday evening.

O'Rourke produced a great start but faded to equal her season's best of 12.91 set in Monday's heat as Sally Pearson took victory in 12.39.

O'Rourke set her personal best of 12.65 when finishing second at the 2010 European Championships but she has been troubled by injury over the past two seasons.

Britton cut more than two seconds off her personal best as she clocked 15:12.97 but finished 10th in her heat and didn't earn a fastest loser's spot.

Hession was drawn in a tough heat and his fifth place in 20.69 was .06secs outside a fastest loser's place.

Those ahead of Hession in the heat include Jamaican star Yohan Blake.

"I had a good start but the middle section is where I seemed to lose it, " said the 29-year-old Irishman.

"When I ran my 20.54 in Lucerne I was quite good in the middle section. I finished reasonably well but I was too far back .

"I would like to have beaten Serhiy Smelyk of the Ukraine who finished a place ahead of me, but it still might not have been enough.

"I would have got through in some of the other heats but that is still not quick enough anyway."

Hession narrowly missed out on qualifying for the final at the Beijing Olympics but he has not been able to reproduce the form he showed in 2007 and 2008 over the last couple of seasons and it remains to be seen whether he will continue his career through to Rio in 2016.

Wicklow woman Britton, after finishing 15th in Saturday's 10,000m, was also in a tough heat in the 5000m and her personal best performance didn't prove enough to qualify for the final.

10,000m winner Tirunesh Dibaba won the heat in 14:58.48 ahead of compatriot Meseret Defar as Britton lost contact with the leaders as the pace increased with three laps to go.

After being pipped for ninth by Britain's Barbara Parker, the Irishwoman was in the fifth and last fastest loser's spot after the opening heat but her hopes were dashed by the second qualifying race.