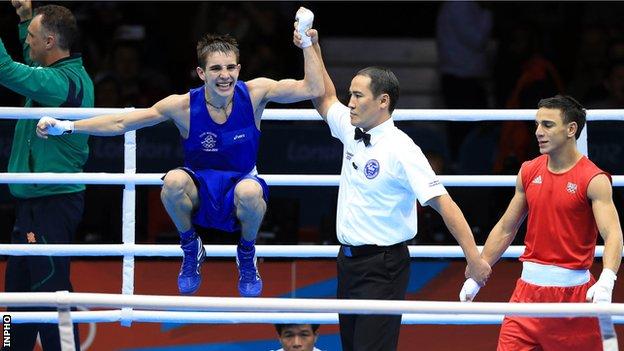 Belfast flyweight Michael Conlan has become the third Irish boxer to clinch a medal at the Olympic Games in London.

Conlan, 20, defeated France's Nordine Oubaali 22-18 in the quarter-finals to join John Joe Nevin and Katie Taylor in guaranteeing at least a bronze.

Another Belfast man Paddy Barnes boxes for a medal on Wednesday when he faces India's Devendro Laishram in the light-flyweight quarter-finals.

Conlan is the fourth Northern Ireland competitor to win a medal at the Games.

The all-action Frenchman appeared to edge the first round in Tuesday evening's quarter-final but the judges delivered a 5-5 verdict on the opening session.

Oubaali continued to come forward in the second round as Conlan again adopted a southpaw stance but there was still nothing between the fighters at the bell as the score was 12-12.

However, the Frenchman became ragged in the final round and the counterpunching Conlan began to enjoy more success in picking off his opponent.

Conlan, who had two previous wins over Oubaali, looked to have done enough to edge the contest although the four-point margin may have been somewhat flattering.

Conlan acknowledged that he came back to his corner after the first round thinking that he was in arrears.

"I thought I was going to be behind after the first round. I was lucky enough," admitted the 20-year-old.

"Billy (Walsh) told me I had a second chance and it changed the fight. He probably thought he should have been ahead.

"In the next round, I stepped it up a bit and in the last round, Billy told me to go for it.

"I dug deep and I have a sore head now.

"He hits hard and it was always going to be tough.

"I've fought him three times and that was the third time I've beaten him.

"It's harder to beat somebody three times than somebody once."