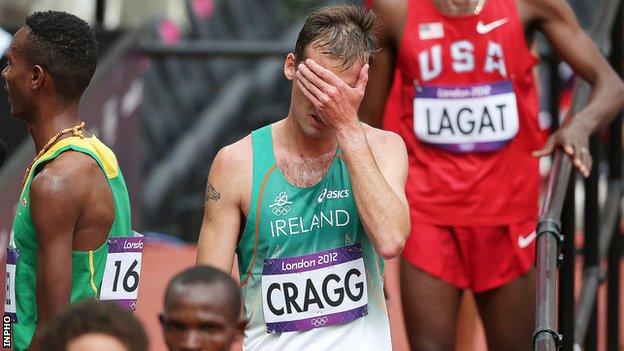 Irish athlete Alistair Cragg exited from the Olympics on Wednesday after producing a disappointing performance in the 5000m heats.

Cragg finished a distant 17th in his heat in a time of 13:47.01 which was almost 26 seconds outside the last fastest loser's spot.

The South African-born runner never looked comfortable as he again struggled at a major championship.

All the fastest losers spots came from the considerably quicker second heat with Djibouti's Mumin Gala earning the last qualification spot with a time of 13:21.21.

Former European Indoor 3,000m champion Cragg has struggled to produce his best form at major championships since dropping out of the European outdoor 5000m final in 2006.

He did qualify for the 5000m final in Beijing where he dropped out and finished 14th in last year's World Championship final in South Korea.

Wednesday's African-dominated heats did have an uneven pace but Cragg, at his best, would have comfortably dealt the task.

The 32-year-old lost contact with the lead pack after five laps and while a drop in the pace did enable him to briefly rejoin the leaders, he was dropped again with six laps remaining.

Cragg's personal best for the distance is the Irish record 13:03.53 which he set in Brussels last September.