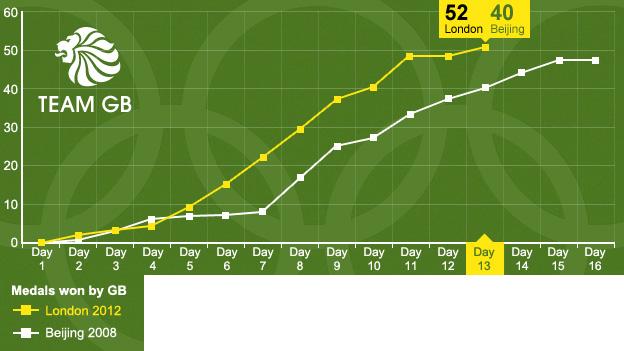 A sport-by-sport round-up of how every Team GB athlete performed on Day 13 of the 2012 Olympic Games in London.

Britain finished Day 13 on a total of 52 medals, compared with 40 at this stage at Beijing in 2008, with 25 golds keeping them third in the medal table.

Lynsey Sharp misses out on the final of the women's 800m, as she finishes seventh in her semi-final with a time of 2:01.78.

Nicola Adams makes history by winning the first Olympic gold medal for women's boxing with a 16-7 win over one of her main rivals, Ren Cancan of China.

Rachel Cawthorn finishes sixth in the final of the women's kayak single with a time of 1:53.345 despite a strong finish.

Abi Edmonds and Louisa Sawers finish third in the B final of the women's kayak double 500m posting a time of 1:46.341.

Liam Phillips qualifies for Friday's men's BMX semi-finals, finishing in second place in each of the three qualifying heats which safely sees him through.

Charlotte Dujardin and her horse Valegro take gold in the final of the individual dressage with a score of 90.089. Laura Bechtolsheimer on Mistral Hojris wins bronze in the same event with a score of 84.339, while Carl Hester finished fifth with 82.857.

Frankie Jones is in 21st place after the first day of qualifying in the individual all-around rhythmic gymnastics, she will compete again on Friday where the top 10 qualify for the final.

Great Britain lose 9-2 to the Netherlands in their men's hockey semi-final. They will play Australia in a bronze medal match on Saturday.

At Weymouth, Thursday's races were postponed because of light winds. This means Luke Patience and Stuart Bithell will have to wait until Friday for the men's 470 medal race.

Keri-Anne Payne finishes in fourth place after a gruelling two hours in the women's open water 10km swim. Her time of 1:38:36.6 is not quite good enough for a medal.

Team GB are out of the women's competition after losing their final game to Italy 11-7.

GB's Ukranian-born wrestler Olga Butkevych is out at the qualifying stage of the women's 55kg freestyle, losing to Lissette Alexandra Antes Castillo of Ecuador.