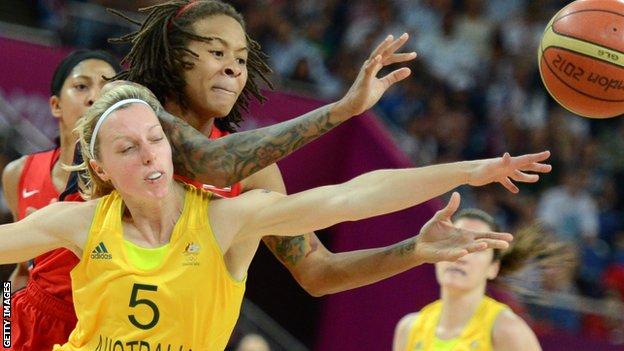 The United States reached the women's basketball final with an 86-73 victory over Australia as they look to secure their fifth successive Olympic gold.

They will play unbeaten France in Saturday's final after the French beat European champions Russia 81-64.

Australia were in the last three Olympic finals and were considered the Americans' biggest rivals.

"Everybody on the outside always talks about us and Australia as if we're the only two teams in the tournament who are any good.

"That's certainly not the case. We knew coming into the tournament that if we wanted to win gold we would have to beat Australia, either in the semis or the final, but the gold medal game is on Saturday."

The US women have not lost in 40 Olympic games but were pushed all the way by Australia, who led midway through the third quarter.

But guard Lindsay Whalen led the US fightback alongside forward Tina Charles as they went on a 26-10 run late on.

"We've got some good players sitting on that bench," added Auriemma.

"Lindsay's been great this whole tournament and never more so than today. In that second half we needed a run and she gave us three straight baskets - that's Lindsay."

France, whose previous best finish was fifth at Sydney in 2000, were inspired by captain and Olympic top scorer Celine Dumerc.

She hit a three-pointer on the third-quarter buzzer as France went on a 20-5 run that killed off Russian hopes.