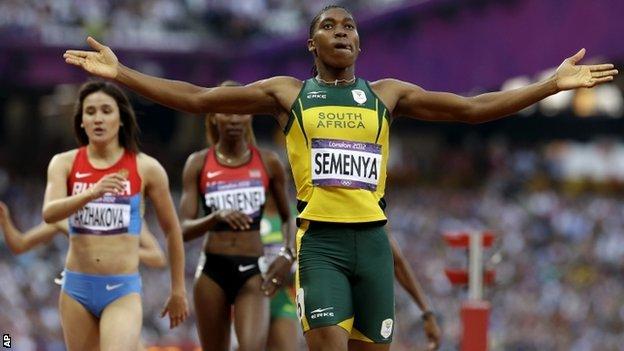 The South African was the fastest qualifier for Saturday's final with a time of one minute 57.67 seconds.

"Caster Semenya is one of the contenders," Mutola, who won the 800m Olympic title at the 2000 Olympics, told BBC Africa.

"Pamela Jelimo from Kenya and the Russians are also very, very capable. I'm looking forward to a good final."

Mutola, 39, set the benchmark for women's 800m running until her retirement in 2008, winning three world titles and the Olympic title in Sydney.

Semenya, who won the 800m title at the 2009 World Championships, asked her "idol" Mutola to be her coach at the end of last year with the sole purpose of helping her win Olympic gold.

The 21-year-old looked comfortable in the semi-finals, producing a burst of speed down the back straight to move to the front of the pack and take the line two metres clear of her rivals.

"You [need to] combine those two things - so if the race is slow you can win anyway and if the race is fast then it's even better, [as in] the final they'll have to dip under two minutes.

"Since I've got here I've focused more on my athlete Caster Semenya as I know she has to do well, so I'm just enjoying being a coach for the first time."

Semenya became global news when she was asked to take a gender test by athletics' governing body the International Association of Athletics Federations in the aftermath of winning her world title.

Doubts were raised over her gender because of her muscular physique, running style and sudden improvement in times.

Semenya was suspended for 11 months by the IAAF but was cleared to return to the track in July 2010.

She won silver at last year's World Championships in Daegu despite a back problem.