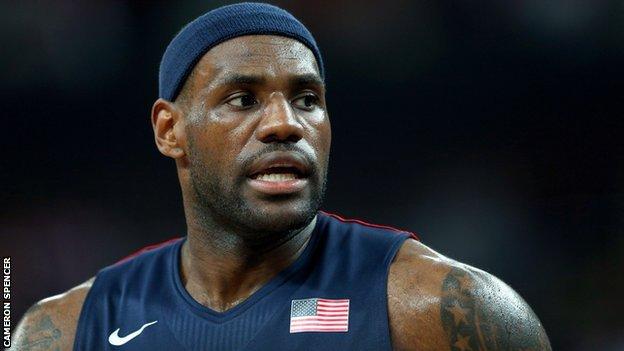 The United States will face Spain in Sunday's final of the men's basketball competition at London 2012 after easing to a 109-83 victory over Argentina.

The Americans, the reigning Olympic champions, took an early lead and never looked like being caught as five of their players ended with double-figure scores at North Greenwich Arena.

Earlier, Spain pulled off a remarkable turnaround to beat Russia 75-70.

"Those seven turnovers in the final quarter for Russia were devastating. Every one of them was capitalised on by the Spanish team."

Russia and Argentina will play for bronze, also on Sunday.

Often dubbed the "Dream Team" for their dominance in the game, the US bolted to an 18-6 lead midway through the opening quarter, with Kobe Bryant taking charge of proceedings.

From there, the Argentines could do little to stop the host of NBA stars coming at them and went in at the interval 40-47 down.

As the Argentine defence continued to crumble, the US found success in their offensive rebounding and at the three-point line.

Spain, ranked second in the world, trailed Russia 20-31 at the break in their semi-final.

But with Russia racking up the turnovers, Spain soon reversed the deficit with the scores level going into the final quarter.

Inspired by Pau Gasol's 16 points, Spain maintained their high tempo to make a strong second-half finish to which the Russians had no answer.