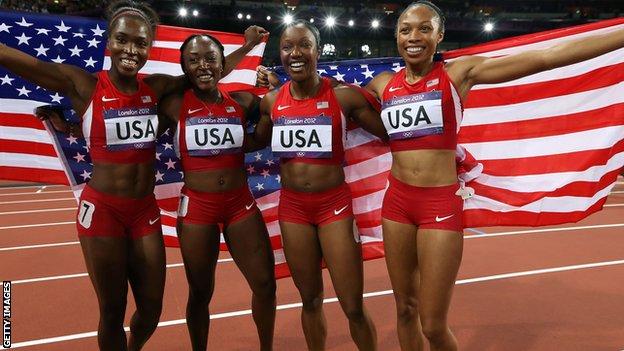 BBC Sport rounds up the action you might have missed on Day 14 of London 2012.

ATHLETICS: USA win the gold medal in the women's 4x100m and break the world record, set by East Germany in 1985, with a time of 40.82 seconds. But Great Britain are disqualified in the men's event after an illegal baton handover.

DIVING: British medal hope Tom Daley scrapes into Saturday's 10m platform semi-finals after finishing in the 15th of 18 qualifying spots in the preliminary round.

HOCKEY: Defending champions Netherlands win women's hockey gold for the third time in their history, while Great Britain secure bronze with a 3-1 win over New Zealand.

SAILING: Two pairs of Great Britain sailors win silver medals, as Hannah Mills and Saskia Clark miss gold after losing out in their final 470 race with New Zealand in Weymouth, while Luke Patience and Stuart Bithell are pipped in the men's 470 race by Australia.

BASKETBALL: USA will meet Spain in the final of the men's basketball after respective victories over Argentina and Russia.

BMX: Great Britain miss out in both the men's and women's finals, with Liam Phillips crashing out and Shanaze Reade finishing sixth.

TAEKWONDO: Lutalo Muhammad becomes the first British man to win an Olympic taekwondo medal, but there is disappointment for world champion Sarah Stevenson, who suffers a surprise first-round exit.