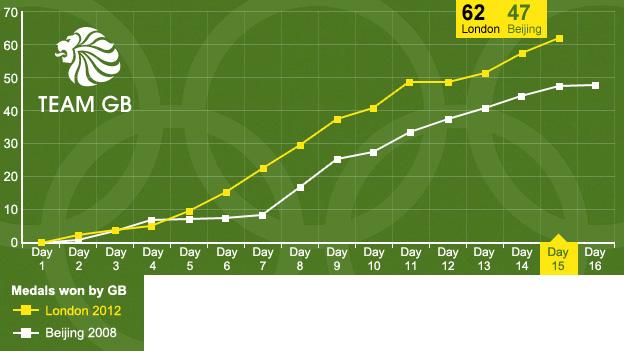 A sport-by-sport round-up of how every Team GB athlete performs on Day 15 of the 2012 Olympic Games in London.

Britain finished Day 15 with a total of 62 medals, compared with 47 at the same stage at Beijing in 2008, keeping them third in the medal table.

Mo Farah wins his second gold of the Games, the 10,000m champion successfully doubling up to win the 5,000m crown in a time of 13.41.66. Farah becomes only the seventh man to win the long-distance double at an Olympics as he holds off Dejen Gebremeskel and Thomas Pkemei Longosiwa.

Dominic King finishes 51st and last in the 50km walk (excluding the 12 athletes who either did not finish at all or were disqualified). Despite coming home 29 minutes after gold medallist Sergey Kirdyapkin of Russia, he receives an enthusiastic response from the home crowd.

Johanna Jackson is one of those disqualified in the women's 20km walk as Russia's Elena Lashmaova wins gold in a world record time. Jackson was removed from the race by judges around the 8km mark.

The women's 4x400m relay quartet finish fifth in the final with a time of 3:24.76, well behind the dominant US team who ease to victory.

Tom Daley wins bronze in the men's 10m platform final with a score of 556.95, with USA's David Boudia winning gold.

GB's men miss out on a home bronze medal by losing 3-1 to Australia in the third place final at the Riverbank Arena. James Tindall scored GB's goal.