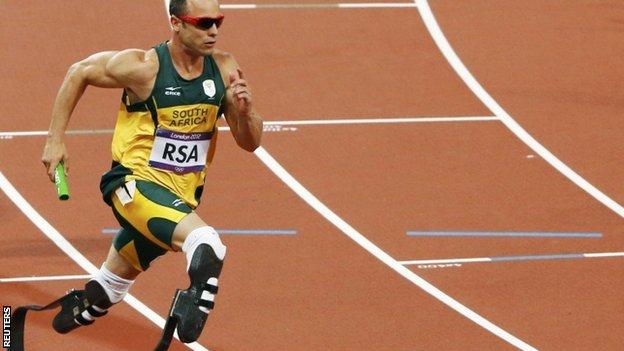 Oscar Pistorius says it was "a dream come true" to compete in an Olympic final for South Africa's 4x400m team.

The 25-year-old became the first amputee sprinter to take part in the Olympics in the men's 400m heats and added another first when a reprieve put South Africa into the relay final.

"To step out here in an Olympic final is more than I could ever have hoped for," Pistorius said.

"The experience has been phenomenal and far beyond my expectations."

Pistorius, who is known as the "Blade Runner" because of the prosthetic carbon fibre limbs he runs with, has worked hard over the last four years to compete in London.

In 2008, the South African won a long battle with athletics' governing body, the IAAF, to compete against able-bodied athletes.

I never set out to prove a point, but I do feel I have made the point

But there had been further doubt this year that Pistorius would get his chance to run in the Olympics when the South African team warned they would "not take passengers to London" after Pistorius failed to clock the qualifying "A" standard for a second time.

"It has been a great achievement for me to come here and compete," said Pistorius, who was able to run in the 400m after winning selection for the relay team.

"I never set out to prove a point, but I do feel I have made the point. It's been a privilege to be on the track with all the other phenomenal athletes.

"If I took all the positive things I thought might come out of this and multiply it by 10, it still couldn't come close.

"This week has just been one of the biggest blessings for me. It's taught me a lot.

Pistorius bowed out of the individual 400m semi-finals in London with a time of 46.54 seconds. South Africa finished eighth in the 4x400m relay with a season's best time of 3:03.46 seconds.

"I think 10 or 20 years from now we will still remember the day when we ran with Oscar at the Olympics."

Pistorius will defend his 100m, 200m and 400m titles at the Paralympic Games in London later in August before turning his attention to his long-term goal, the 2016 Rio Olympics.