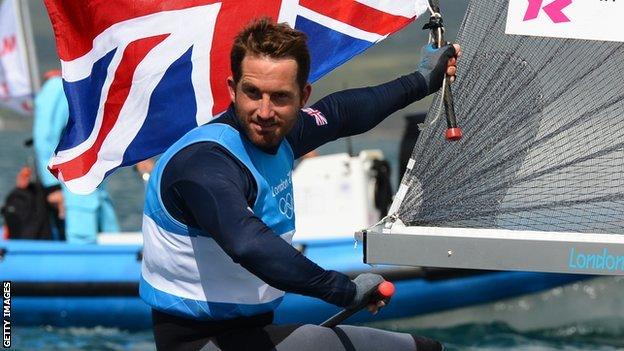 Ben Ainslie has been chosen to carry the flag for Team GB at Sunday's closing ceremony of the Olympics.

Ainslie, was selected by the British Olympic Association's team leaders.

Ben Ainslie at the Olympics

The 35-year-old collected a fourth successive gold medal when he won the Finn class at London 2012.

"It's a really proud moment to have such an involvement at the end of an amazing Games," said Ainslie.

"There have been so many people involved in making these Games so special, so I think one thing you'd say on behalf of all the athletes is thanks so much to everyone involved - all the volunteers, and the whole nation for getting behind the team.

"It's been our best performance at the Olympics and I think a lot of that comes down to having so much fantastic home support."

The first of Ainslie's five Olympic medals - the most of any sailor - was a silver in the Laser class at Atlanta 1996, claimed when he was just 19.

He then won golds at Sydney 2000, Athens 2004 and Beijing 2008, all in the Finn discipline, before adding a fourth in Weymouth to overhaul Dane Paul Elvstrom's record of four golds in consecutive Games.

Ainslie has said he is unlikely to compete at the 2016 Olympics in Rio.

"There are a number of worthy candidates from Team GB's ranks, athletes who have made the country proud and distinguished themselves through their accomplishments here at London 2012.

"But in becoming the most decorated sailor in Olympic history, Ben has earned the honour of leading our delegation into the closing ceremony of these extraordinary Games.

"As we pass the Olympic baton on to Rio, we as a team are privileged to have Ben lead the way."

Track cyclist Sir Chris Hoy, who now has six Olympic golds, was selected to carry the British flag at the opening ceremony.

The 36-year-old went on to win two cycling golds in London to become Britain's most successful Olympian with six titles in total.