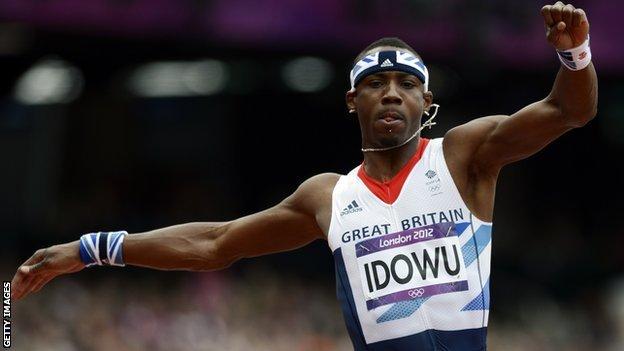 Henry Ashman asks: "Given swimming's dip in medals vs. Beijing, should they adopt some of the approaches used by cycling eg. centralised training?"

SP: "I think somebody should look at the best practices in cycling - but not just that sport, all sports that have been successful. I think they should take the best things from every sport and see how they can help. There is a sort of centralised training with five locations, so it is just keeping those succinct."

Jason Mercer asks: "If you could add one sport and eject another from the Olympics, what would you choose?"

SP: "I would get rid of football because the Olympics are not the pinnacle of the sport, so it should not be in. I would bring in squash as it is played by men and women in hundreds of countries across the world and is a massive participation sport."

Andy Jolley asks: "Will enforced competition at a young age put some children off sports and is it just a smoke screen to disguise cuts to funding?"

SP: "All kids are good at something, whether it is sport, music, academia or whatever and competition can be only a good thing that helps development. I don't think it is a disguise to cuts in funding."

James Naylor asks: "Jonathan, do you believe that your triple jump world record will ever be beaten. After all, it's been 17 years now."

Kevin asks: "Could Blake's lane have affected his 200m final run, having Bolt in lane seven? Looks like he tightened up trying to catch him?"

JE: "I think probably Blake had an advantage as he could see where Bolt was, while Bolt was running blind so to speak. The inside lane can be tighter but he's a smaller guy so I don't think it was any disadvantage for him being in that lane."

Phil Riley asks: "Where does Phillips Idowu go from here? Isn't it about time him and Charles van Commenee resolved their differences?"

JE: "Phillips needs an operation on his injury, so the surgeon's knife and rehab are what is next for him. He's 33 so there is no reason why he shouldn't carry on if he is motivated and hungry to return.

"I think now that 2012 has come and gone, and Phillips hasn't jumped well, I think there has to be some resolution with Charles, but not just him as I think the relationship between Phillips and UK Athletics as a whole is not great and I don't think that's healthy for Phillips, Charles or UKA. Some sort of resolution has to come."

Ed Stradling ‏asks: "Andrew Osagie ran the fastest 800m by a Brit for 22 years. Might we have a world-class middle-distance man on our books at last?"

James Thiele asks: "Do you think the recent success in track cycling will encourage investment in more velodromes being built?"

CB: "We're on our way with the Olympic Park in London, Chris Hoy's in Glasgow and the one in Newport in Wales and there is one planned for Derby and a re-covering of the track at Meadowhall. We need to make sure they are well used."

Stewart Walsh asks: "Do you think Mark Cavendish, Bradley Wiggins and Shanaze Reade will return to the track for Rio or could other youngsters get the nod ahead of them?"

CB: "Shanaze needs to decide in which direction she wants to go. Bradley probably won't because he has bigger fish to fry. Mark Cavendish desperately wants a gold medal so I could definitely see him in the track team."

Chris Williams asks: "Who would accompany you in your team pursuit dream team?"

CB: "Well, I probably wouldn't be in it! To be honest I don't think I'd change any of the current team."

Joseph Emslie asks: "Why do some track bikes have open wheels and some have filled in wheels?"

CB: "It's all to do with aerodynamics. The filled-in wheels are more aerodynamic but the handling of them isn't great."

Jason Mercer asks: "If you could add one sport and eject another from the Olympics, what would you choose?"

CB: "Sticking with cycling, I'd put the individual pursuit back in and get rid of the keirin. It's the same as the individual sprint anyway, apart from waiting for a motorbike to get out of the way!"

Tiger asks: "How will the UCI (cycling's world governing body) change the rules and try to prevent GB winning medals at Rio, and are we prepared for that?"

CB: "We're all excited about what the UCI's reaction will be to one team's dominance on the track! The British team has got a winning philosophy which it will apply to whatever the UCI does.

"The UCI should concentrate on encouraging other countries' development rather than holding back the established ones."