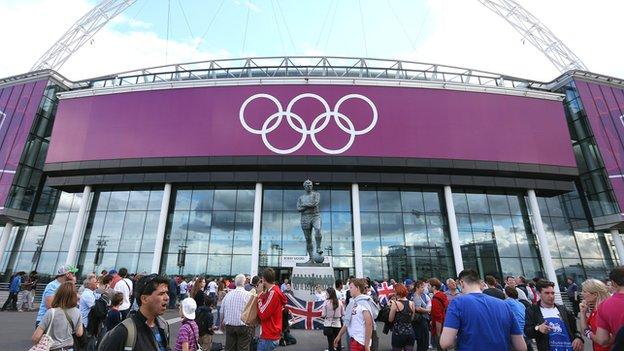 The London Olympics enveloped Great Britain with a feel-good factor and created a lifetime of cherished memories.

It was a success on so many levels, not least for GB's Olympians who won 65 medals as the host nation finished third in the table.

But what about the Olympic football?

After two typically disappointing quarter-final defeats, the men's and women's GB football teams were unable to add to that spectacular haul and their participation was over by the end of 'Super Saturday'.

Considering the amount of argument and divide caused by the very subject of GB's participation in the football tournament, the question must be asked - was it worth it?

This was the Games when Great Britain made their debut in the women's football tournament. It also saw the GB men's team participate for the first time in 52 years.

The Football Associations of Wales, Northern Ireland and Scotland had always been opposed to the presence of a unified GB team, fearing it might damage their independent status within football's world governing body Fifa.

The stance of the three governing bodies remains deeply entrenched and GB coaches Stuart Pearce and Hope Powell both admitted after their teams were eliminated that it is difficult to envisage GB playing at the football tournament in Rio in 2016.

"I do not think it will happen again," said Pearce.

"Home advantage has allowed us to have this opportunity, but when you look at international programmes and bringing nationalities together, where are we going to find the time to enter a qualification period?"

The men's team would need to qualify through the European Under-21 championship in 2015, but the home nations will participate independently in that tournament.

"Other nations will argue that if we have Team GB in Olympic football then why do we not have them in World Cups?" said BBC's football pundit Garth Crooks, who followed the GB men's team during the Games.

"I enjoyed the concept of Team GB but I think it is the last time we will see it in my lifetime."

There were undoubted plus points to the men's campaign. They won their group, with a defeat of highly fancied Uruguay to secure qualification to the last eight the highlight.

"Some say football should not be part of the Olympics but in some parts of the world - in particular central and south America - it is considered a big deal. So it was fitting that Brazil and Mexico contested the men's final."

See who Garth selected in his men's team of the tournament

England coach Roy Hodgson went along to watch and included five players from GB in his squad for Wednesday's friendly against Italy. Young Welsh trio Aaron Ramsey, Neil Taylor and Joe Allen all had a taste of major tournament football, which can only help their development.

The men's competition is effectively an Under-23 competition, with three over-age players allowed in each squad of 18. Brazil, who lost 2-1 to Mexico in the final, used the tournament as an important staging post as they prepare to host the 2014 World Cup.

Many of the Brazilians who played against Mexico are expected to figure at the World Cup and they were coached by Mano Menezes, who is also in charge of the senior team and claimed to have learnt valuable lessons at the Games.

"Just because the Olympic tournament is not part of our footballing DNA in Great Britain does not mean that it is not very important," added Crooks.

With GB unlikely to figure again, players will arguably miss out on an important learning process as they attempt to bridge the gap between Under-21 football and the senior side.

The tournament offered former Wales captain Ryan Giggs an unexpected opportunity to play at a major tournament in the twilight of his career. The 38-year-old was in no doubt about the benefit of participating in the Games.

"It can only be good for players' development and experience," said Giggs. "I would want players to experience what I have experienced: the whole Olympic attitude and coming up against good, organised teams."

The situation is different in the women's game, where it is an open-age tournament. Powell's squad of 18 brought together the best players in Great Britain and they participated in a tournament that ranks alongside the World Cup as the pinnacle of their sport.

Despite their disappointing defeat against Canada in Coventry, Powell's team provided enough highlights to easily justify their participation. They were the first team from GB to compete at the Games and went on to defeat Brazil in front of 70,584 at Wembley.

Powell, who is also the coach of the England women's team, wants a GB women's side in Rio, even if the men are not there. I am sure that many of the 154,998 who turned out to watch their five matches would agree.

GB participated as host nation, while France and Sweden qualified as the two highest European finishers at the 2011 Women's Fifa World Cup. As with the men, the issue of how GB would qualify for Rio looks like an insurmountable problem.

The stance of the SFA has not changed but their senior media manager Clare Bodel told BBC Sport: "What was interesting was the size of the crowds that attended the women's games. At a time when we are trying to develop the women's game at international level, it suggests that there is a market out there for it."

In England the FA WSL (Women's Super League) resumes later this month after closing down during the Games. 'Find a club' is the top item on its website, asking whether you've been inspired by Steph Houghton and the other GB players this summer.

"Defending champions the United States won their fourth title, narrowly seeing off World Cup winners Japan in front of an Olympic record 80,203 people, to bring down the curtain on an enthralling women's competition at London 2012."

See who Jacqui selected in her women's team of the tournament

It was announced last week that England's next match, a Euro 2013 qualifier against Croatia, will take place in Walsall on 19 September and the FA is keen to capitalise on what has been widely viewed as a very good Games for women's football.

The long-term legacy of Great Britain's participation in the football in 2012 might just be that it leads to a watershed for moment for women's football.

That alone would surely be enough to justify entering the football competition. But for me what really made it worthwhile was that it took the Olympic Games out of London.

Team GB played in Cardiff, Coventry and Manchester as well as London. They were brilliantly supported, often by families who might not otherwise attend football games.

The Games should be for everyone - and the football tournament gave thousands the chance to say that they had cheered on GB in 2012.