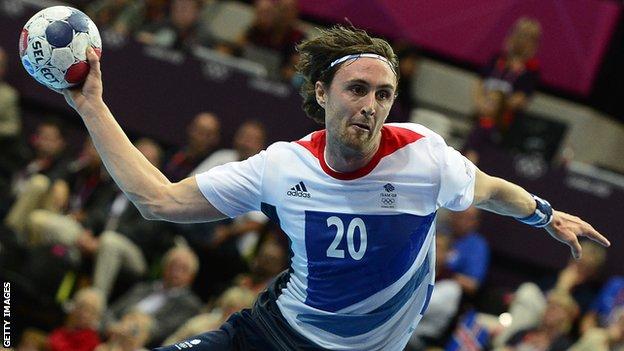 Great Britain handball player Mark Hawkins has called for funding for the sport to be sustained.

Levels of investment in the game could be cut by UK Sport ahead of Rio 2016.

He told BBC Sussex: "The people who hand out the money have to watch some of the games and see how much interest there is from the public

"If they can back us then we will be able to keep the national team competitive and develop the game at a grass-roots level."

The 26-year-old from Horsham added: "Every sport has to start from somewhere.

"The cycling and athletics programmes had to start from somewhere and we know we have a long road ahead.

"I'm sure we've got the ability in the playing squad and the interest to develop the game to the point where we are competing for medals in the next 10 to 12 years."

Hawkins, who currently plays in Iceland, says the exposure the sport recieved during the Olympic Games shows the game has potential to be developed in the UK.

"The reaction for us was amazing," the winger continued.

"The Copper Box where we played gained a reputation around the Olympic Park and the athletes' village of how good the atmosphere was in there.

"It's fantastic for a sport like handball which is trying to break into the mainstream. We [the players] had a great response, as have the governing body and clubs.

"After the first game one club had 7,000 emails from people interested in coming to play, which is phenomenal.

"We really hope we can capitalise on that and use it to boost the sport.

"We've been through a lot and the players are finalising clubs to play for in Europe next season.

"Then, it's about keeping the exposure and I'm sure it will come."