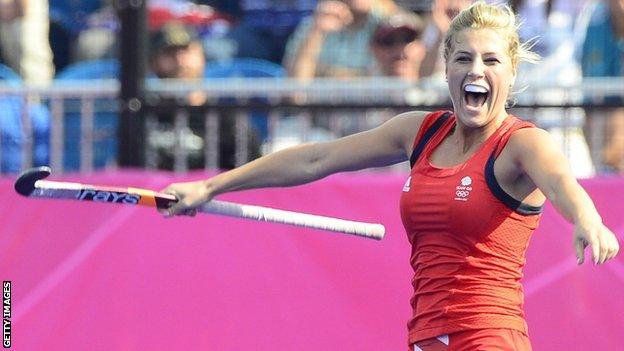 Georgie Twigg has pledged to stick with hockey and is aiming to help Great Britain's women's team achieve further success at the Rio de Janeiro Olympics.

The 21-year-old midfielder was a key member of the Team GB side that won bronze at London 2012.

Twigg told BBC Radio Lincolnshire: "I do intend to carry on in hockey. Just think how far we could come by Rio.

"The opening and closing ceremonies were amazing and I feel so lucky to have been part of that [the Olympics]."

Lincoln-born Twigg, who made her Great Britain debut in 2010, recalled the moment she received her medal for women's hockey, saying it was difficult to take in.

"It was definitely a goosebump moment," she said. "To step up there and the crowd were roaring, you can't quite believe it.

"It was a very proud moment. They put the medal around your neck and it's surreal but you try to take it all in. I was welling up a bit."

The Clifton Ladies player says she is now struggling to adjust to post-Olympic life.

"It is bizarre not having such a structured day. For the past three weeks I have had everything planned out for me. I have always had my food cooked for me and things like that.

"Now, I am having to plan what I have to do with my days so it is getting back to reality.

"We talked about the next few weeks and not going onto a low. We have a couple of weeks off. We will see friends and family and, hopefully, get a bit of holiday. I am starting law school in London soon, so need to sort all that out."