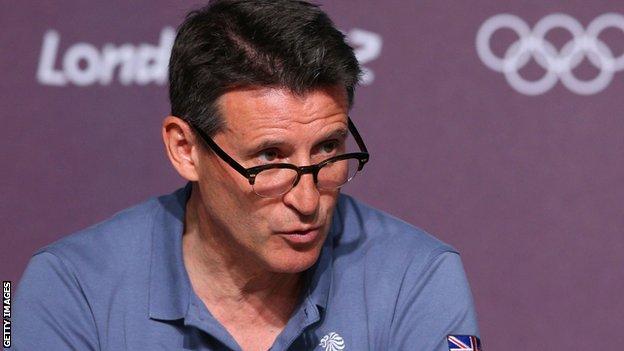 London 2012 chief Lord Coe has been elected as chairman of the British Olympic Association.

He was elected unopposed after the withdrawal of the only other candidate, British hockey boss Richard Leman.

Coe, a 1500m Olympic gold medallist in 1980 and 1984, led London's successful bid for the 2012 Olympics and was subsequently made chairman of the Games organiser Locog.

The 56-year-old succeeds Lord Moynihan as head of the BOA on a four-year term.

Coe's brief will be to help Team GB build on the success of London 2012, where it produced the best results at a summer Olympic Games for more than a century, winning 65 medals.

"I do consider this a huge honour because this is an organisation that defined a large part of my adult life," said Coe.

"You cannot join an organisation like the British Olympic Association without recognising the extraordinary history. The history of the BOA is the history of British sport.

"It is a large part of the history of the Olympic movement. In 1908 and 1948 we didn't just deliver a Games but set a tone and a style for the movement for many decades to come."

Coe admitted he was disappointed when the BOA's lifetime ban for doping was overturned by the Court of Arbitration for Sport in May.

"My stance is still non-negotiable. You know from everything I have done that I will chair an organisation which will take a zero tolerance approach to drugs in sport," he said.

"99% of the athletes supported that bylaw and I am sorry that we weren't able to uphold it. We will need to think how we will adapt to that landscape.

"We have to recognise that we are in a much more complex and complicated world than we were 30 years ago."

As legacy ambassador, Coe has also been asked to advise Prime Minister David Cameron on how to best secure long-term benefits for the UK following the London Games.

"Seb Coe demonstrated inspirational leadership in delivering the best ever Olympic and Paralympic Games this summer and as a double Olympic gold medallist himself there can be no better choice for BOA chairman," said Cameron.

"He fully understands the support that athletes and sports governing bodies need in this country.

"Combined with his role as the Government's legacy ambassador, Seb will play a crucial part in maximising the benefits from London 2012, helping our athletes achieve gold in Rio and British businesses win new trade and investment deals."