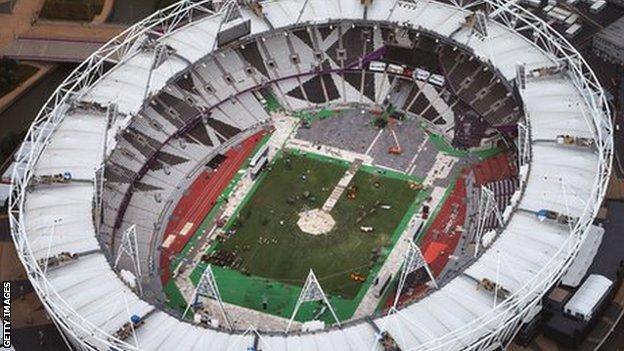 Despite claims to the contrary, Boris Johnson believes the Olympic Stadium will be ready to reopen before the end of the Rio Games in 2016.

Nevertheless - and despite the London Mayor's optimism when talking to London Assembly members on Wednesday - it remains a very real prospect that a stadium widely acclaimed during London's successful Games, and which took just three years to build, will take four years to convert.

Dennis Hone, the chief executive of the London Legacy Development Corporation (LLDC), said as much again when he repeated his line to the London Assembly from last week that 2015 is now the target but 2016 a possibility.

Johnson added, worryingly, that Londoners might have to be patient and recognise the Olympic Stadium was not built to be "the kind of omni-purpose world-class venue capable of hosting Premier League football that it should be".

So why are we in this mess?

The main reason, as Johnson suggests, is that organisers made a major mistake by writing Premier League football out of original designs for the legacy use of the stadium. But we've known this for years. So why is it in danger of descending into another farce?

The process to find a long-term anchor for the stadium is stalling because the plans to convert it for Premier League football have changed again, increasing the cost to somewhere between £180m and £190m.

Under the original deal with West Ham, which collapsed last autumn because of legal challenges, the Premier League team would own the freehold to the stadium.

At that time the cost discussed was around £95m to £100m and was to be funded from three sources - £38m from the Olympic budget of £9.3bn, £40m from Newham Council in the form of a low interest loan, and around £20m from the sale of Upton Park.

This would have paid to extend the roof - which currently only covers two thirds of the seating area - add corporate hospitality facilities and refurbish toilets.

So why has the cost almost doubled?

The main reason is the decision to add retractable seating to bring football fans closer to the action.

Demountable seats - similar to the ones used for temporary venues like Greenwich Park during the Games - cost less but take weeks to put up and take down.

This potentially impacts on the commercial value of the stadium as it may reduce the number of events that can be staged there.

So, while a retractable seating mechanism costs a lot more to factor in, the LLDC is thought to now favour the option as it could lead to more income in the long run.

The roof also needs an even bigger extension as it would now need to cover the running track and the retractable seats on it.

But while the costs have gone up, the funding provision has, largely, remained the same.

There is still £38m from the Olympic budget, a loan of £40m from Newham (although this could be increased) and a contribution from West Ham, though, surprisingly perhaps, this appears to have gone down to around £10m.

West Ham argue that they bring unique commercial value to the stadium project and now believe that, as they are no longer going to own the freehold to the stadium, it is the landlord - the mayor and LLDC - who should bear the cost of upgrading it for football. Without them, the stadium will become a costly millstone around taxpayers' necks, they say.

The Premier League club are understood to have submitted a package which includes a minimum lump sum, an annual rental (around £2m) and a share of any naming rights deal they are able to bring in. There is also haggling going on over how the revenue from catering should be split between tenant and landlord.

But it is the capital funding shortfall that is proving to be the big stumbling block. So how do you plug the gap?

Johnson has already tried to raid the £377m Olympic budget underspend - receiving a swift and negative response from the Chancellor, George Osborne. There are London taxpayer funds available and the LLDC itself could raid some of its own transformation budget but that could mean spending less on other parts of the park. There is also nervousness about the legal implications of publicly subsidising a big football club.

It is a complicated process that has not been helped by the continual changes at the top of the LLDC. Johnson is now chairing the organisation, having taken over from Daniel Moylan in September, while Hone, the widely respected chief of the Olympic Delivery Authority, replaced former chief executive Andy Altman.

West Ham remain the favourites to secure the deal as anchor tenants for a stadium which cost £431m to build, well ahead of rival bids from Leyton Orient Football Club, a football business school and a consortium proposing Formula One races in the park.

Yet the LLDC could still snub West Ham, appoint an operating company and just hire the stadium out for concerts and more occasional sporting events like NFL matches, big rugby games, combining it with more community use.

This would allow the stadium to reopen in 2014, and avoid spending the best part of £200m and losing valuable income while the stadium remains shut. Without a big football team the running costs would also be lower.

Of course all this could have been avoided had the Government and the Olympic Delivery Authority factored in Premier League football back in 2006 and 2007 when the plans were being drawn up.

It is a costly mistake which continues to overshadow all the other wonderful achievements delivered by London's Olympic organisers.