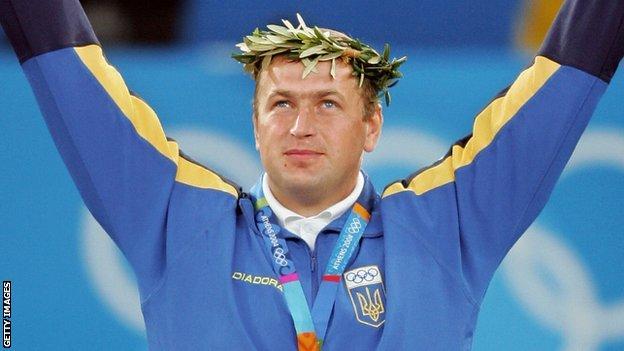 Four athletes from the 2004 Athens Olympics have been stripped of their medals for using anabolic steroids.

Ukraine's Yuriy Bilonog, Ivan Tsikhan and Irina Yatchenko of Belarus, and Russia's Svetlana Krivelyova have all been ordered to hand back their medals.

The International Olympic Committee reanalysed several samples in a bid to catch those to had avoided detection.

The IOC put off a final decision on stripping Lance Armstrong of his 2000 Sydney Olympics bronze medal.

The total tally of doping cases from the Athens Olympics is 31 with 26 positive tests having occurred at the time - the most in any Games.

Armstrong, whose medal came in the individual time trial, was stripped of his seven Tour de France titles by cycling's governing body the UCI in October and banned for life following the US Anti-Doping Agency's report of widespread doping.

However, IOC president Jacques Rogge said the body could not take the medal away until the UCI notified Armstrong of its decision to annul all his results since August 1998.

Rogge said: "It is a legal obligation, not for the IOC but for the UCI. When he has been notified, Mr Armstrong will have 21 days in which to launch an appeal if he so wishes.

"It is only after that period of 21 days that the IOC can take action."

Rogge added it was not in the IOC's jurisdiction to reallocate Armstrong's bronze medal should he be stripped of it.

Bilonog has been stripped of his gold in the shot put, while Krivelyova - also a shot-putter - and discus thrower Yatchenko lose their bronze medals.

Three-times world hammer champion Tsikhan, who was withdrawn from the London Olympics after the banned substances were found in samples from Athens, lost his silver medal.

A case involving a fifth unnamed athlete is still pending.

One hundred samples from the Olympics in Athens were retested for banned substances with more modern methods.

The IOC stores samples for eight years so they can be re-tested for newly discovered substances or for those that could not be detected at the time.

The total tally of doping cases from the Athens Games is now 31, after 26 positive tests at the time - the most in any Olympics.