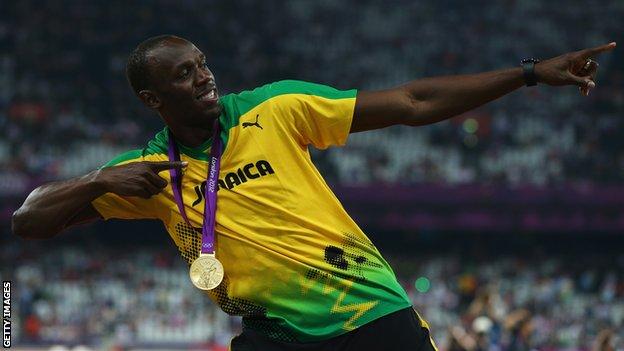 For a few brief weeks in 2012, British athletes shone against the world's best as the greatest show on earth came to London.

But while the roar of the Olympic Stadium still echoes in British ears, it's easy to forget that names such as Mo Farah, Andy Murray and Jessica Ennis are less recognised overseas.

And while Britain marvelled at a skinny cyclist with iconic sideburns, Germany's sporting hero was a balding 20-stone discuss thrower.

Across the globe, athletics tracks became a blur of yellow and green as Jamaica became the world's sprinting capital.

In football, meanwhile, as England struggled, Spain dominated on the international stage, winning their third major tournament in a row at Euro 2012.

While in cricket-mad India, the country celebrated a fantastic performance at London 2012.

Here the BBC looks at how some of the world's leading newspapers viewed the sporting year.

Discus thrower Robert Harting was named Sportsman of the Year by German newspaper Die Welt, following his gold medal at London 2012. Harting famously celebrated his victory by ripping off his shirt and running a lap of honour, clearing several hurdles in the process, while draped in his country's flag.

"Bedsores" was the unlikely word of the year for readers the same paper. It was used by television pundit and former Bayern Player Mehmet Scholl to criticise Mario Gomez's performance in Germany's Euro 2012 match against Portugal, despite him scoring the game's only goal.

"If he did more work he would get a lot more chances and score a lot more goals," Scholl said, adding, "I was worried that he might get bedsores."

With three goals and one assist, Gomez ended the tournament as joint top-scorer, only missing out on the Golden Boot to Fernando Torres because he had more match time.

"Spain is in paradise"

Unsurprisingly, football dominated El Pais newspaper's 2012 sporting review, with Spain's triumph at Euro 2012 named the moment of the year. The paper described the 4-0 demolition of Italy in the final as an "exhibition for eternity".

The paper also named Atletico Madrid boss Diego Simeone coach of the year for "transforming" the club and "squeezing the full potential out of his staff". Arsene Wenger was awarded the dubious award of the Angela Merkel prize for believing that you can "get out of a crisis by imposing austerity".

Swimmer Yannick Agnel was named Sport 24 newspaper's top athlete of 2012. Agnel famously overtook American Ryan Lochte in the anchor leg of the 4x100m freestyle relay to secure gold for France. The France 24 website says the country can now consider itself to be a "swimming superpower".

Sport in India often appears to begin and end with cricket, but 2012 was different. A record haul of six medals in London meant that athletes such as wrestler Sushil Kumar, badminton ace Saina Nehwal and shooter Vijay Kumar topped the Times of India newspaper's list of sporting achievers of 2012, ahead of the nation's cricketers.

Batsman Sachin Tendulkar still made the cut - and rightfully so, after becoming the only player in history to score a century of centuries in international cricket.

Defeats by England and Pakistan capped what the paper called a "difficult" year for Indian cricket, characterised by both heavy losses and high profile retirements, not least Tendulkar himself, who bowed out of the one day format.

The pool was also the focus of attention for the English version of China's state-run People's Daily newspaper, which hailed the country's swimmers above all other athletes in its review of the year.

The aquatic centre provided 10 of China's 38 gold medals, and Sun Yang and Ye Shiwen were singled out as the "crown jewels" of the team.

"A new generation, led by Sun and Ye, has stepped to the fore and it seems the best is yet to come for Chinese swimming," the paper said.

Australians are known for their sporting obsession, but 2012 was not their year. The country's poor showing at the Olympics was the main talking point of the Australian Times's review of the year, with the paper expressing hope that better fortunes in 2013 would dispel the "dark days" of the year gone.

However, the paper did not forget to praise the "two tenacious women who turned their steel into gold" - hurdler Sally Pearson and sprint cyclist Anna Meares's medal triumphs were celebrated.

Champion swimmer Ian Thorpe, aka "the Thorpedo" wasn't so lucky. He was described as "a dud" after failing to qualify for London.

Away from the Olympics, the paper reserved special congratulations for now-retired cricket captain Ricky Ponting and his successor Michael Clark.

The tiny Caribbean island's sprinting dominance was confirmed this month when Track and Field magazine released its world rankings for 2012.

Usain Bolt and Yohan Blake made it a Jamaican one-two in the men's category, with Asafa Powell coming fifth, while 100m Olympic gold medallist Shelley-Ann Fraser-Pryce took the top spot for the women.

The Jamaica Observer newspaper noted that Bolt's achievements and personality tend to steal the limelight from Fraser-Pryce, who became only the third woman in history to successfully defend the 100m Olympic title.

The paper noted that Pryce has been "indirectly forced to play second fiddle to perhaps the greatest athletes the world has ever known… which itself is a manifestation of the abundance of sprinting talent currently at our disposal."