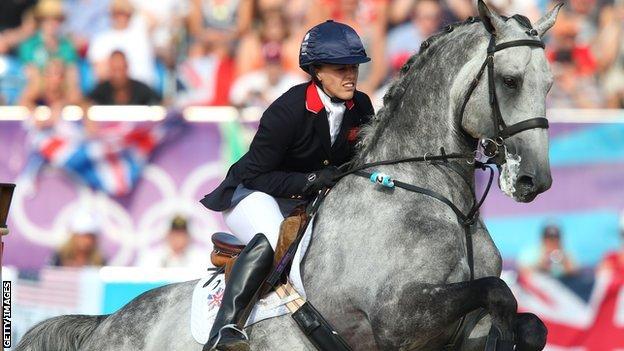 Ah, those wonderful memories of six months ago, those 16 golden days of celebration and elation, of British medals wherever you cared to look, of a nation united in success and revelling in the happiest sporting summer of them all.

I told some people I was a hairdresser. Others I told I was a post-lady. I couldn't tell them I was an Olympic athlete. I didn't feel I deserved that title

"For me, it was a disaster. I can't describe it in any other way. I felt it destroyed part of me."

Mhairi Spence represents the untold flipside of the London Olympics. World champion going into the Games, one of the favourites for gold, the modern pentathlete's tale is not only an extraordinary insight into the cruel vagaries of sport but a reminder of the very different way some will forever feel about London 2012.

For all of Baron de Coubertin's idealism about taking part, most competitors went to the Olympics to succeed. If they didn't - and in the harsh economics of elite sport, failure can be leaving without a medal - then worlds collapsed.

Spence was 26 years old, an athlete at the peak of her sport, as she stepped out at Greenwich Park on the afternoon of 12 August to compete for the final gold of the London Games.

A steady performance in the morning's fencing and swimming had left her in ninth, but with the show-jumping - her strongest event - to follow, she was well placed to make her move. Until, that is, she was allotted a mount named Coronado's Son in the random draw.

"I got on the horse and straight away felt out of control," she remembers. "My coach looked at what the horse was doing and asked me what was going on. I said: 'I'm not doing anything.'

"A horse can be one way in the warm-up arena and another way entirely in competition, because they know what their job is. So I thought, he's out of control now, maybe that will switch. It wasn't until jump two when I realised, I'm in trouble here.

"You keep trying. Every jump is a new job. Go through your process again. But when I finished the course and the announcer read out my score, I realised it was over. Gone. You're fighting for hope, but I jumped off the horse and knew."

With four fences down and 104 penalty points conceded, Spence's hopes of Olympic success - built up over four long years since failing to qualify in Beijing, the product of thousands of hours of training and self-sacrifice, fantasised about since childhood - had disappeared in under two minutes. And then the self-recrimination began.

"That wonderful word, 'unfair'… It's a strange sport we do. You always know you might get a horse that doesn't want to work with you. But I'm a strong rider. I always hoped I wouldn't get anything so bad that I wouldn't be able to control it.

"For it to happen on that one day. Of all the competitions I've done in my life, why now? Why me?

"When I qualified for London, I felt like somebody. I felt like I was good enough, that I was the person I was trying to be for so many years.

"I climbed off the horse and walked away with my coach. There was nothing to say. 'I am done. My heart is broken.'"

Further hampered in the final discipline - the combined events - by a faulty shooting target, Spence would finish in 21st place, a forgotten footnote.

"As an athlete you put yourself out there to be tested, to fail. And every time you lose, a little piece of you gets chipped away," she says.

"Having been bullied in school and had so many knockbacks - to have success in London would have let me say to others, look what I've done, you can do it too.

"I had wanted to show people who I was. Instead I felt like I'd let everyone down. So many of my friends and family had come to watch. They said they were proud of me for competing, but you only think they would be more proud if you were on the podium.

"I felt like I was a nobody, that I shouldn't be in my GB kit. You would think it would get easier to deal with it, but it doesn't. It still breaks you down."

Spence was not the only athlete lost in London's giddy slipstream. Over the past six months I have spoken to several high-profile members of Team GB who considered quitting sport entirely in the wake of perceived failure at the Games, and others who endured their own dark nights when injury or selection denied them even the chance to compete.

While the rest of the country wanted only to talk of Olympics, many of its representatives in London wanted anything but.

"Every day I would turn on the TV and it would be there," says Spence. "It was making it impossible to get over what had happened. So I booked a flight to Australia. 'Get me away from this.'"

From home-town Olympian to indistinguishable backpacker. Dropping into the well-worn traveller route from Sydney to Cairns, Spence attempted to disappear.

"I refused to tell anyone what I did. You turn up at a hostel, check into a room with eight beds, and it begins: 'Where are you from, what do you do?'

"I told some people I was a hairdresser. Others I told I was a post-lady. I couldn't tell them I was an Olympic athlete. I didn't feel I deserved that title.

"For the first month I didn't let myself think about London. It was too hard. Anytime I thought about it I felt a heaviness. I could feel the tears coming. It was running away, but I needed to."

At one point, on a sailing trip around the Whitsunday Islands with a disparate group of travellers, talk turned to a previous port of call on that east coast route.

"We all figured out we were on Fraser Island at the same time," says Spence. "Then one girl says, 'Did you hear the rumour?' 'What rumour?' 'There was an Olympic athlete on the island when we were there!'

One night on the yacht, Spence found herself unable to sleep. Just before dawn she climbed up on deck and sat there, alone, waiting for the sun to come up.

"It wasn't until then that I began to process what I was feeling. In those quiet moments I could ask myself, how do I feel about it?

"A few weeks later I got probed more and more in another conversation. It came out that I had been to the Olympics. This guy couldn't get over it, that he was sharing a room with someone who had competed in London. And all I could think was, big deal, I came 21st.

"But these little things helped. They slowly gave me a more balanced view of what had happened. People thought it was great that you had even made it there, and that gave me a renewed view of myself."

• Introduced to Olympics in 1912 by Baron de Coubertin

• Takes place on a single day

• In London, the women's modern pentathlon was the final event of the Games

To those of us who only experience elite sport from the outside looking in, such intense emotions might appear excessive, an over-reaction to something that is, to the unconverted, just a pastime. The Olympics matter, but they are not war or death or disease.

But they are also the pinnacle, and for someone whose life and ambitions have been built around them, their defining challenge.

Spence had no desire to become mired in her misery. On the other side of the world from her native Inverness, far from the Scottish winter and the constant reminders of London's summer, she was tempted to stay away for good - "out of the bubble", as she puts it.

That she came back, and to compete again in the sport De Coubertin himself introduced to the Olympics, was about avoiding the easy option.

"Even now it's not gone. Some days I do find it hard. Could I train for four more years and then have exactly the same thing happen to me?

"But I felt I owed it to myself - all the years of hard work, the brutal sessions. It wouldn't be right not to come back.

"Being a professional athlete is an amazing, wonderful life-style, and we're incredibly lucky. But it takes a lot to continually pick yourself up again.

"Everything is about maximising your training or maximising your recovery. You become your sport. It consumes every angle of your life. And you will meet with triumph and disaster."

That famous line from Kipling is no throwaway thought. The words are there on the inside of Spence's left forearm, tattooed in black ink, a permanent reminder of the Olympic ordeal she has come through.

"When I was eight years old, I won a 25m breast-stroke race at my club championship," she says. "It was the first thing I ever won. That was when I decided I was going to go to the Olympics, and that I was going to win a medal."

She laughs, and then falls silent for a long moment. "It would be a shame to let that eight-year-old down."