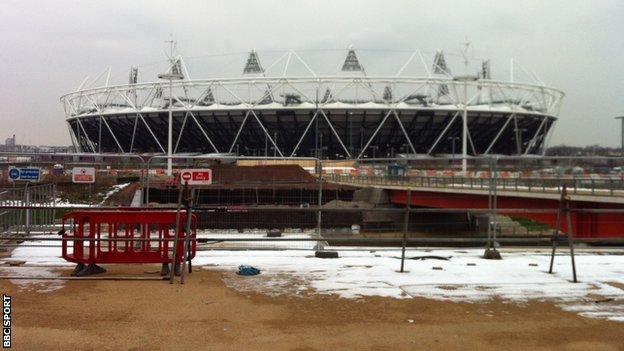 Just before the closing ceremony of the Paralympics I went and sat out on the main Olympic concourse, with a box of fish and chips and a drink and watched the world go by: the waft of fried food, the buzz of the crowd, the colour, sound, anticipation, it was all there.

The closest I can get to that spot today is about 400 metres away, behind a railing in a safe walkway area. No need for shades and a baseball cap to keep the sun out of the eyes. It is fleecy hat and gloves weather, the T-shirt has been exchanged for a high-visibility jacket, the deck shoes for steel toe-capped boots and I have got a hard hat in my hand.

The site looks hauntingly like it did in 2010, two years out from the games - it is all railings, cones and hazard lights now

The site looks hauntingly like it did in 2010, two years before the Games. Instead of the Riverside Arena, there is a muddy bowl, a digger where the blue and pink "smurf turf" hockey pitch used to be and the technicolour kaleidoscope of humanity has been replaced with a monotone wasteland of construction work. Nothing feels or looks the same as it did in the hours before the Games' opening ceremony last July, but the permanent structures help with orientation.

To my far left, there is the Aquatic Centre, Orbit and Stadium. Behind me the Velodrome, opposite lurks the pragmatic grey oblong of the broadcast and media centres. The temporary venues in between have largely now been removed, not just the buildings but also the asphalted walkways and the paths and soft landscaping. It is all railings, cones and hazard lights now.

Initially, it feels like the end of something. You have to remind yourself that it is actually a new beginning. This site is having a makeover, a £300m re-invention. Just as during games construction, it is planned meticulously, and there are serious deadlines.

The London Legacy Development Corporation is overseeing the transformation, focusing firmly on July this year when the phased re-opening of the North Park should begin.

We now know the stadium will see live sport again at the end of that month, with the London Grand Prix meeting confirmed for the 27th. It is not just sport either. The Hard Rock Calling and Wireless festivals are moving from Hyde Park to Queen Elizabeth Olympic Park this summer too.

With five new neighbourhoods and 8,000 homes to create, the Park is in the early stages of a project that will stretch to 2020 and beyond. The hard legacy for business and the local community will take time to be realised, the sporting venues are the early priority:

So what of the big picture for the main stadium? Tough negotiations continue with West Ham's owners over the details that will, with agreement, make the park the club's new home from 2016. We're not there yet, and the LLDC has a deadline looming, at the end of February, to commit to being a 2015 Rugby World Cup venue.

That won't happen if the West Ham deal's done, but if it can't be sealed, it might. Negotiating positions must surely have been played out, perhaps it's time for an ultimatum?