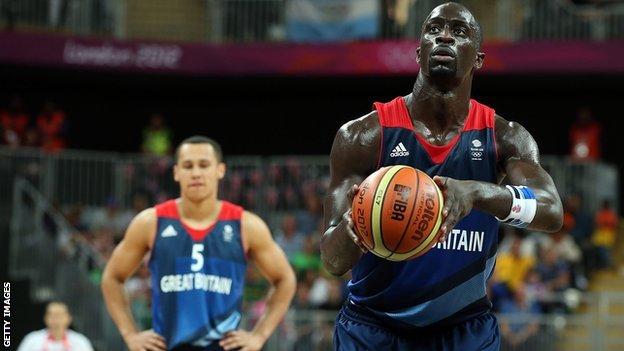 British Basketball has won a one-year funding reprieve after to UK Sport over its £8.5m cut.

The sport, which had been left with no elite funding for the build-up to Rio 2016, has not yet been told how much it will receive.

Wheelchair fencing, which lost its entire £552,000 budget, has also been given a year's funding.

Table tennis, wrestling and volleyball (sitting and indoor) missed out on a reprieve.

Both sports will receive one year's funding, with the remaining three years dependent on "strict performance criteria".

Further talks will take place in the next few weeks to determine how much they will receive.

"They have acknowledged that we successfully presented compelling new performance data, which not only impressed the board but made them recognise that we are potential podium contenders for 2020."

British Basketball has been very public in its appeal for support, with superstar Luol Deng revealing he had personally written to Prime Minister David Cameron urging him to reverse UK Sport's decision to pull all funding.

UK Sport is renowned for its objective, 'no compromise' approach to funding - it doesn't do heart-tugging stories of Olympic dreams or Corinthian ideals about just taking part. It's in the business of winning, so its U-turn on basketball and wheelchair fencing is because those two sports convinced UK Sport that they really do have 'podium potential' - they've now got enough cash for a year to prove they deserve funding all the way to Rio

The men claimed a historic 90-58 victory over China at London 2012, while over the past six years the women's team have risen from the bottom of the global standings to their current position as world number 24.

The GB wheelchair fencing team had only one member in Beijing in 2008 but significant development work saw them field a team of eight at the London Paralympics.

Although both the men and women's teams failed to medal at the Games, the women's team featured teenager Gabi Down, 14, one of the youngest members of the British team at the Games.

Following Friday's announcement, team member Craig McCann tweeted: "Great news that wheelchair fencing will be getting funding following the appeal. Time to get the Dream Team back on track!"

Seven Olympic and Paralympic sports were invited to win a funding reprieve for Rio 2016 on Wednesday.

Each national governing body was granted a 30 to 40-minute slot in front of the UK Sport board to make their case.

UK Sport chief executive Liz Nicholl said: "UK Sport is delighted to be able to confirm that we will now be investing in two additional sports for the Rio cycle, taking the overall total to 44 sports.

"The door is not closed to any sport that has had their funding reduced or stopped.

"Every sport has the opportunity to come back to us at the annual review stage to make a case for future funding if they can demonstrate sufficient progress to evidence a credible medal opportunity within the next eight years."