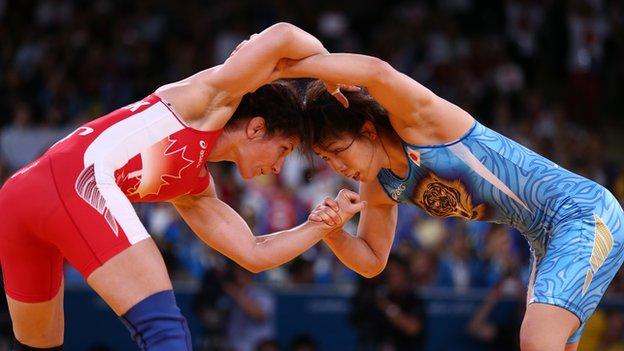 Wrestling is set to be dropped from the 2020 Olympic Games to make way for a new sport.

The International Olympic Committee (IOC) recommended its dismissal after assessing the performance of all 26 sports at the London Games.

There is a slim chance wrestling may win a reprieve when the IOC meets in September to ratify its choice.

Wushu is better known in the west as Kung Fu. There are two major disciplines for competition: Taolu (forms) and Sanda (full contact fighting). Only Taolu, which also involves the symbolic use of weaponry, is being put forward for 2020 entry.

Find out more about the other sports aiming to become an Olympic event.

Modern pentathlon and taekwondo were thought to be the sports most at risk when the IOC committee met in Lausanne, Switzerland on Tuesday, but wrestling was the surprise choice.

It will now compete with with seven other sports - baseball/softball, squash, karate, sport climbing, wakeboarding, wushu and roller sports - for a place in the 2020 Games.

"This is not the end of the process, this is purely a recommendation," said IOC spokesman Mark Adams. "This is not about what's wrong with wrestling but what is good for the Games."

It is unlikely wrestling will be voted back in so soon after being removed by the executive board, but Adams stressed: "Today's decision is not final."

A Fila statement said: "FILA will take all necessary steps to convince the executive committee and members of the IOC of this aberration of a decision against one of the founding sports of the ancient and modern Olympic Games."

Wrestling, which combines freestyle and Greco-Roman events, was included in the inaugural modern Olympics in Athens in 1896.

United States Olympic Committee CEO Scott Blackmun: "It is important to remember that today's action is a recommendation, and we hope that there will be a meaningful opportunity to discuss the important role that wrestling plays in the sports landscape both in the United States and around the world. In the meantime, we will fully support USA Wrestling and its athletes."

President of the Russian wrestling federation Mikhail Mamiashvili, 1988 Olympic Greco-Roman gold medallist: "I was absolutely convinced this ancient sport would retain its status. But FILA (the world amateur wrestling federation), and the whole wrestling community must take a more active role in the process. We need to make some drastic changes in the sport, make it more attractive, especially for TV audiences."

It has been in every Games since, apart from Paris in 1900. At last year's Olympics, it featured 344 athletes competing in 11 medal events.

The 2004 Olympic gold medallist, American Cael Sanderson said: "Wrestling and the Olympics go hand-in-hand. When you start taking the original sports away from the Olympics, you really change what the Olympic Games are. What are you going to do next - change the name of the Olympics?"

British wrestler Non Evans told the BBC: "I didn't see it coming. I'm very shocked, surprised and disappointed. Wrestling is one of the most ancient sports, but I think the world has changed.

"This will have a huge impact on wrestling. When you are young you aspire to compete at an Olympics or World Cup. When a sport is not at the Olympics, as a child you will choose a different sport."

Despite the decision, Nicholson said Great Britain would not lose focus in the next Olympics in Rio de Janeiro.

"We will be looking to deliver success in 2016," he said. "We have two athletes who we believe are genuine medal contenders.

"We are fortunate that we are a Commonwealth sport so our athletes will continue aspiring towards 2014 and 2018.

"In the meantime, we will remain hopeful that the IOC may give wrestling another chance to remain part of the Games."

Before making its decision, the IOC's programme commission assessed each sport by looking at such factors as TV ratings, ticket sales, anti-doping and global popularity.

Who struck wrestling gold at London 2012

"We have promised things and we have delivered," he said. "That gives me a great feeling. It also gives me new energy to develop our sport further and never give up."

"Olympic inclusion is absolutely essential to our sport," he said. "It is at the centre of everything we do. We can relax now and work to continually modernise the sport and raise awareness."

Samatha Murray, who won silver for GB in the Modern Pentathlon at London 2012, said on Twitter: "This is a very sad day for wrestling. However I want to thank the IOC's decision to keep #ModPen in the OG for 2020. I'm elated. Thank you."

Golf and rugby sevens will be part of the programme for the 2016 Games in Rio de Janeiro after winning inclusion in 2010.

The IOC will also decide in September whether Istanbul, Madrid or Tokyo will host the 2020 Games.