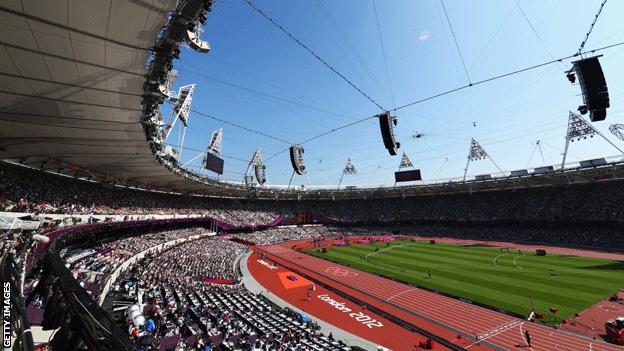 Sebastian Coe told the BBC's Today programme on Friday that the legacy from last year's Olympics is already "profound".

Forty-six weeks on from the Games he said school sport, the economy, volunteering and the main Olympic venues had all made a good start.

But he acknowledged, rightly, that there is still a long way to go.

As London's Olympic Stadium prepares to welcome back big crowds for the Anniversary Games this weekend, it is inevitable that people will ask questions about whether London 2012 is on track to deliver on its legacy promises.

It is worth remembering that no Olympic host city has ever tried to do what London is doing.

At a time when they are being squeezed, the government needs to think about whether it is doing enough to ensure there are courts and pitches to play on

Sydney wasted the best part of a decade working out what to do with the Olympic Park at Homebush while Barcelona's use of the iconic diving pool and aquatics centre for this week's World Championships is a notable one off. Beijing's Olympic Stadium is essentially a tourist attraction.

So, to sell out the Olympic Stadium for three days exactly one year on from the London Games is a real achievement.

As I took the all too familiar walk from Westfield to the stadium earlier this week it was impossible to miss the amount of work already completed or under way.

The temporary stands bolted on to architect Zaha Hadid's aquatics centre have been removed revealing the venue in all its curvaceous beauty. One side is partially glazed and when finished it's sure to become the iconic building on the Olympic Park (yes, even better than the velodrome).

As you approach the stadium you have to walk through a building site. There can't be a clearer message of how London has not wasted any time in transforming the park.

Once inside the stadium it feels like the last 12 months never happened. The Olympic cauldron and the flags have gone, of course, but it is still an inspiring place and packed with 80,000 people it is sure to revive memories of those thrilling days and nights last summer.

This will be the last time the stadium looks like this. After the summer work will begin on turning it into West Ham's new home. And with the other seven venues on the park now moving into legacy mode, there is little room for nostalgia.

But while the venues and the park might be making good progress, concerns over the 'soft' legacy - the task of transforming our sporting habits - remain.

Tellingly Coe did not mention participation on the Today programme. That could have simply been a factor of live radio but it may also have reflected the fact that despite the 1.4m increase in adults regularly playing sport since 2005 (when London won the bid to stage the Games) the picture since last summer is mixed.

On Friday the BBC published the results of a poll conducted by ComRes. It found 11% of adults said they were playing sport more regularly because of the Games.

How is one to view that? Is 11% a sign of things going in the right direction? Or is it a bit underwhelming considering the biggest leap in interest and commitment would come in the immediate aftermath of the Games.

The most recent findings from Sport England's Active People survey suggests it may be the latter. The report said there had been a 200,000 drop in the number of adults playing sport since the Games.

The fall was blamed on the harsh winter, but whatever the excuses the idea there should be a decrease in people playing sport after such a successful home Olympics can't be good.

So what's the answer? At the moment the government is empowering sports governing bodies to drive up grassroots participation and withholding lottery money from those who don't deliver. Tennis, for example, has been told it won't get all its funding unless they show they are making progress in this area.

This is the same hard-headed approach that worked so well for our elite sportsmen and women. If sports don't produce medals, they get less funding. Simple as that. This has to be the right approach.

But it's also a question of facilities and in most cases that comes down to local authority budgets. At a time when they are being squeezed, the government needs to think about whether it is doing enough to ensure there are courts and pitches to play on.

A number of people have written to me flagging up cuts and closures which contradict the overarching commitment to increasing grassroots participation.

Could more money be found or another way of releasing good facilities for wider community use? A lot of good work is already happening in this area, but, as ever, more could be done.

Worryingly, it seemed to me that after the Games there was a lack of real drive around this issue. The moment the Olympics and Paralympics ended there was no nationwide campaign telling people how they could take up sports they had just watched or urging them to get more active.

That was a missed opportunity but given the recent run of sporting success, perhaps it's not too late.