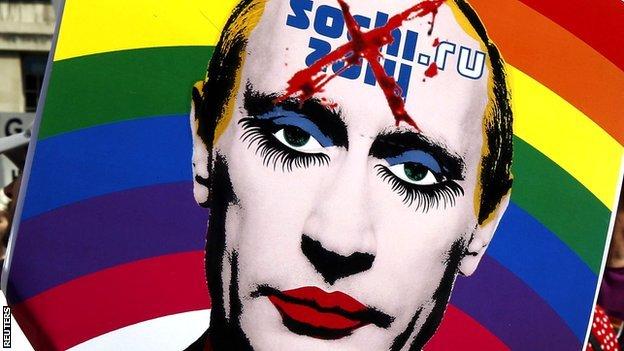 Not for the first time in its long history the International Olympic Committee finds itself in the uncomfortable position of being expected to uphold widely accepted international values at the same time as avoiding direct political interference.

As with Beijing in 2008 and Los Angeles and Moscow in the 1980s, the Sochi Winter Olympics have become a magnet for activists and campaigners calling for a political boycott.

The issue? A new piece of legislation introduced by Vladimir Putin's government in June which outlaws the distribution of material promoting homosexual (or, as they put, it non-traditional) relationships to children under the age of 18.

Campaigners such as the comedian Stephen Fry say they are barbaric and will be used to crackdown on homosexuality in Russia. The Russian government says the right to be gay is enshrined in the constitution of the Russian Federation and that the new law is purely designed to protect minors.

Whatever the truth, the controversy is now guaranteed to overshadow the build-up to Sochi next February. Already they are being referred to as the 'Gay Games' with IOC officials bracing themselves for a wave of podium protests and displays of solidarity with the gay community.

We have already seen it from Swedish athletes Emma Green-Tregaro and Moa Hjelmer during the recent World Athletics championships in Moscow. They painted their fingernails in the rainbow colours - a universal symbol of gay pride - prompting Russian pole vault champion Yelena Isinbayeva to criticise them for being disrespectful to the hosts.

Isinbayeva went even further, defending the laws and suggesting gay relationships were not normal. She later clarified the remarks - under pressure from the IOC.

In my interview with the IOC president Jacques Rogge - his last before he stands down after 12 years at the helm of the Olympic movement next month - he makes clear his irritation at Isanbayeva.

As ever with Rogge, a Belgian surgeon famed for quiet diplomacy, he chooses his words with precision.

It is remarkable that in more than a decade at the top of world sport, his only real blunder was when he criticised Usain Bolt for his lightning bolt celebrations after he exploded onto the scene with such force in Beijing.

Sounding like an out-of-touch High Court judge, Rogge betrayed his conservative instincts (not surprising for a man who at the time was in his late 60s) by suggesting the Jamaican should have reservedly shaken his beaten opponents by the hand instead of cavorting all around the Bird's Nest.

On the question of gay rights though, there is no room for error. What politician - even a sports politician - would dare to swim against the tide on an issue of such sensitivity? Sensing an opportunity to send a message without getting involved in a direct political row with Moscow, he seized on the Isanbayeva comments during our meeting.

"It was disappointing," he said before adding that she was "ill judged" to get involved in the debate. He may wish he could go even further by perhaps removing her as mayor of the Olympic Village in Sochi or as an ambassador of the Youth Olympic Games, a project close to his heart. But he knows that could upset the already tense relationship with the Russian government and Sochi's organising committee.

He said: "We are staging the games in a sovereign, independent country and we have to respect the sovereignty."

And so once again the IOC finds itself wanting to act strongly but unable to do so. Under pressure from all sides to do the right thing, but neutered by its own sporting limitations.

That is not to say that the 'soft power' of the Games is not effective as a tool of international diplomacy. The media attention and focus on the gay rights issue will make it extremely difficult for Russia to do anything which might attract condemnation - for the next 12 months at least.

But, ultimately, as Rogge himself admits, once the Olympic circus has packed up and moved on there is very little the IOC can do to ensure pre-Games promises are kept.

Witness what seems to be happening in China, with some scientific reports suggesting pollution has got worse in Beijing since 2008 and growing concerns over human rights.

Whoever takes over from Rogge at the IOC session Buenos Aires next month - and the smart money is on the German Thomas Bach - will be handed a difficult diplomatic issue. But the new incumbent will know it is a problem almost as old as the IOC itself.