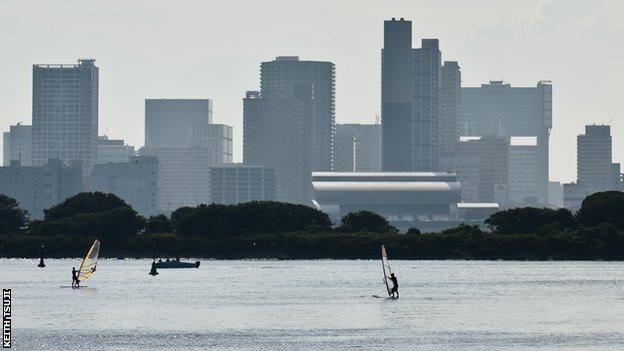 On Saturday the International Olympic Committee will vote on whether Tokyo, Istanbul or Madrid will host the 2020 Olympics. Here BBC Tokyo correspondent Rupert Wingfield-Hayes gives the view from Japan's capital.

If Tokyo is awarded the 2020 Olympic Games this weekend it will be because it is safe.

"You can drop your wallet on the street and it will be returned to you with the money still in it," Tokyo's governor Naoki Inose told me in a recent interview.

"What other city in the world can boast that sort of hospitality?"

And he's right. I know because it has happened to me.

Tokyo is probably the safest big city in the world. Drunk businessmen really do fall asleep on the pavement and wake up next morning with their briefcase still beside them.

But it's not just lack of street crime that makes Tokyo safe for the Olympics. It's the fantastic infrastructure, the city's very deep pockets, and Japan's reputation for organisation - unparalleled anywhere except, perhaps, Germany. And of course Tokyo has done it all before in 1964.

The unspoken message to the IOC is: "If you go to Madrid or Istanbul you risk disaster; if you come to Tokyo you know everything will go like clockwork."

In fact Governor Inose said as much to me in none too diplomatic language.

But Tokyo's "safe" sales pitch has one major flaw, and it's called Fukushima Daiichi. In the last few weeks Japan's crippled nuclear power plant has been leaking a lot of bad news. Radioactive water has been found seeping into the ocean. Storage tanks filled with radioactive water have been found leaking into the soil. And this week a radiation reading at the pant jumped by 22 times.

So worried is the government by all the negative publicity that Prime Minister Shinzo Abe was forced to go in front of the cameras on Wednesday to defend himself.

"We understand that people are voicing concerns over the contaminated water issue in Fukushima." He said "What I can say is that we are implementing drastic measures with firm resolve. In seven years' time, it will not be a problem at all.

19:00 Report by the IOC evaluation commission

21:00 Announcement ceremony of the host city

22:30 Signature of the Host City Contract

It cannot be a coincidence that on the same day, just four days before the vote in Buenos Aires, Mr Abe announced nearly half a billion US dollars to help stabilize the Fukushima plant. A high-tech underground ice wall will be constructed right around the reactor buildings to seal them off and stop water leaking in to the sea.

But will it work? And will it be enough to convince the voters on the IOC that Tokyo really will be safe in 2020?

If it does then there is one last niggling concern for Tokyo. It may be rich, efficient and safe, but is it excited? Opinion polls suggest a majority of Tokyoites are behind the bid. But it doesn't particularly feel like it. Apart from a huge "2020" neon sign lighting up the Tokyo Tower you could be forgiven for not realising this city is running at all.

When I ask him why, Governor Inose scoffs.

"That is exactly what the media said right before the London Olympics," he says.

"Lots of British media were saying that London is not excited. Do you remember that? That is very typical for developed countries. The supporting rate for the London Olympics was 68% and Tokyo has already reached 70%. So we are higher than London, so I feel good about it."