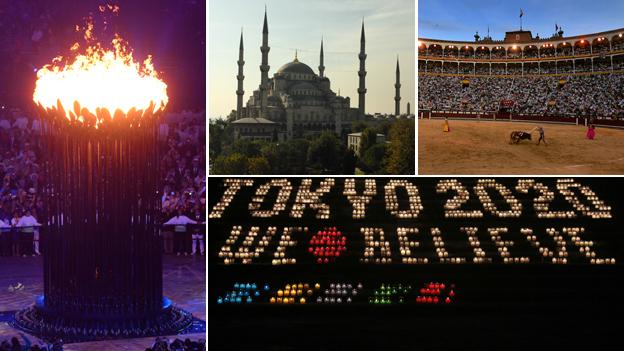 Olympic votes used to be carved up in secretive smoke-filled corridors. But in the lobby of the Hilton Hotel in Buenos Aires, there's nowhere to hide.

Overlooked by balconies and glass elevators, it's one of those airy atriums, all marble and light, so beloved of modern architects.

For the last few days this place has been getting more and more manic as Olympic officials arrive in Argentina from around the world for one of the most important International Olympic Committee meetings in a generation.

The 125th session of the IOC will not only choose a host for the 2020 summer Games, it will also confirm the sports programme for that Olympics and elect a new president to replace Jacques Rogge, who is standing down after 12 years.

With so many different agendas at play, the lobby is bustling, full of tanned, grey-haired men in dark suits desperately pressing the flesh and back slapping. Everyone is talking to each other with one eye on someone else.

Representatives from the three cities bidding for 2020 - Istanbul, Madrid and Tokyo - hover anxiously, trying to catch a word with members who may swing the vote their way.

Officials from Madrid, with their distinctive red ties, have set up shop at a coffee table right in the centre of the lobby. A source says they came here weeks ago to check out the best spot and then made sure the hotel's owners didn't give it away to any of their rivals.

"It was the perfect place," the source explained. "We could see everyone who was coming and going, who was coming down in the lifts or coming through the main entrance. Then we could easily create a situation where you bump into them and start a conversation."

That these bids are so carefully choreographed shouldn't be a surprise. One of the reasons for London's successful campaign for the 2012 Games was its meticulous strategy of courting IOC members.

With voting officials unable to visit each of the candidate cities, the vast majority of them know this is their only chance to have one-on-one conversations with the people who may end up staging the Games.

In the past they would have been able to go and check out the bidders for themselves but in the wake of the Salt Lake City corruption scandal - where members were found to have accepted gifts in return for votes - they are expected to rely on the report of an evaluation commission.

That's why each of the bid teams are given their own allocation of 10 to 12 rooms here at the Hilton to entertain members in more private surroundings. To ensure there are no awkward clashes as members shuttle from bid to bid, each city is given their own floor - Madrid on the fourth and Istanbul and Tokyo on the first and second.

In those rooms, each bid's visiting politicians and dignitaries are holding court for 14 or 15 hours a day - from breakfast to late-night drinks. Spain are hoping Prince Felipe can make the difference. Tokyo are also playing the royal card having brought Princess Hisako.

None of the bidders dare leave their most senior politicians at home - Spain's leader Mariano Rajoy is here as is Japanese Prime Minister Shinzo Abe. Turkey's premier Recep Tayyip Erdogan was making calls to IOC members from his plane as he flew to Argentina for the election.

No wonder this place feels like a grand bazaar. It's made all the more frenetic by the IOC presidential election on Tuesday. In the wine bars, coffee shops and restaurants which surround the atrium, the six presidential candidates are busy trying to garner support.

Thomas Bach, the favourite from Germany, moves from meeting to meeting, table to table. It's all designed for public consumption - a signal to the members that he is working the room and ready to listen.

But for all the apparent openness and transparency, you can't help feeling the real deals are still being done elsewhere, perhaps not in smoke-filled rooms (smoking has been banned in public places in Argentina since 2011), but in private suites on floors high above this lobby.

And for all the conversations going on, you sense with each one it becomes harder and harder to discern what's really going on.

Alex Gilady, an influential IOC member from Israel, says: "No one knows what is going to happen in these votes. It's done in secret and anyone who tells you they know is almost certainly lying."

So as the hours tick down to the 2020 decision, what can cities do to secure the votes they need?

Juanito Samaranch, the son of the former IOC president, now an IOC member himself and a senior figure in the Madrid bid, perhaps summed the atmosphere up best:

"In the end all you can do is run around like headless ducks."

But all the frenzied activity could just pay off. According to most IOC members I spoke with, this is one of the tightest contests for years.

Tokyo arrived here as clear favourites but have been undermined by concerns over the safety issues relating to the crippled nuclear power plant at Fukushima - 150 miles up the road.

Madrid is the city with momentum and there is no question they have powerful connections in the IOC. Their problem is the Spanish economy plus a number of other European cities such as Paris and Rome fancy bidding for the Games in 2024. Is it possible to win without the full backing of major European powers like France and Italy?

As for Istanbul, most people have been writing off their chances following the government's heavy-handed crackdown on street protests. But with perhaps as many as a third of the 97 IOC members said to be undecided, perhaps none of the cities should be ruled out.

As London's victory showed in 2005, the favourite doesn't always win. Back then Paris was expected to romp home but London's legacy promise and persuasive final presentations won the day.

Once again the final presentations will be critical, but for once this is a contest which may not be determined by the winner's strengths but by its ability to reassure the IOC about its weaknesses.